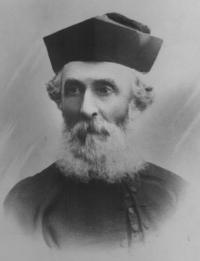 Samuel was born on Tuesday, 27 August 1822 at Weymouth, Dorset.1,2 He was the son of James MacKenzie Fooks and Jane Berjew. Rev. Samuel Berjew Fookes was baptized on Wednesday, 30 October 1822 at Melcombe Regis, Weymouth, Dorset.3

For two years Samuel made a living as a dairy farmer.2,8 His name was legally changed to Samuel Berjew Fookes although this was not done by deed poll.2 He moved to Hobart, Tasmania in 1842.2

Soon after, Samuel began thinking of taking Holy Orders, perhaps influenced by his mother's strong christian faith, who, along with Bishop Nixon, assisted him in his preparations.10 He was Rector on 20 February 1847 at St. Lukes Anglican, in Richmond, Tasmania.11

He married Margaret Sarah Westbrook, daughter of Dr. Samuel Westbrook and Mary Margaret Mason, at Anglican Chapel on Saturday, 20 February 1847 at Buckland Plains, Tasmania. He was 24 and his wife Margaret was 24. Witnesses to the wedding were Dr. Samuel Westbrook.12,13,14 Samuel, aged 25 and Margaret Sarah Westbrook, aged 25 likely became the parents of Rev. Henry Samuel Cox Fooks on 1 January 1848 at Richmond, Tasmania.15 He was ordained a minister in 1848 at St. David's Church, in Hobart.10,9 Samuel was employed by the Reverend F. H. Cox as curate.10,8

Rev. Samuel Berjew Fookes was one of a number of Anglican ministers to sign a petition against transportation, largely on the grounds of the effect that would have on the colony and the colonists (rather than the effect on the convicts) in December 1850.16

His wife Margaret died 11 June 1854 at the age of 31, leaving him a widower at age 31.19 With Margaret's death and the strain of work in the prision, Samuel's health deteriorated. It was decided that he should take up other duties.10

He married Louisa Jean Hobkirk, daughter of John Peter Hobkirk and Frances Mary Lecosne, at Trinity Church on Monday, 7 May 1855 at Launceston, Tasmania. He was 32 and his wife Louisa was 21.22,23,24

On 17 October 1855 his character was impunged by a letter to the paper, to which he gave a response.25

In October 1857 he was apponted to St. Matthias, in Windermere, Tasmania.9

When his departure from Circular Head, Tasmania was announced in late 1857, seventy eight of his students signed a letter of thanks to him for their religious instruction, to which he responded.26 He eventually had to give up the Windamere post due to the amount of boating on the Tamar that he needed to do to maintain the Parish.8

In May 1861 he was appointed to St. Andrew's Anglican, in Perth, Tasmania.9 Samuel lived in July 1861 at Colebrook Dale, Tasmania.27 He received the Archbishops degree of Master of Arts on Bishop Nixon's recommendation circa 1864.8 He was became curate circa 1872 at St. Luke's, in Richmond, Tasmania.9,8

On Thursday, 10 April 1873 he reported that a horse of his was 'stolen or strayed'; the horse was an aged chestnut, with a white blaze down it's face.28

His mother died 15 April 1875 at the age of 97. Samuel was aged 52 when this happened. He applied for and received the pension; "After some while gathering his strength he was engaged as curate at St. David's under the Rev. H. C. Garlick for some time, taking a special interest in the mission district; and when his services were no longer required there he assisted Canon Archer at All Saints', and took occasional services in some country parishes." circa 1877.8 Grace Fookes and Reverend James Sutherland Babington were married by Rev. Samuel Berjew Fookes on Wednesday, 12 August 1885 at St. David's Mission Church, in Hobart.29,14

Samuel died on 2 November 1892 at Sandy Bay, Hobart, at age 70 after a long illness.8,1,30 His body was interred at Queensborough Cemetery at Sandy Bay, Hobart. The cemetery has since been converted to Schoolgrounds for the Hutchins School. Some headstones were preserved and erected in a little park in Peel Street, Sandy Bay. The headstone of Samuel Fookes, his second wife Louisa Jean Hobkirk and others of his second family are amongst those preserved in the Peel Street site. The headstone of the Westbrook family, including Samuel Westbrook is preserved in the same park..31,3032