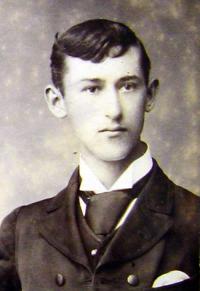 He presumably lived with his parents at Plumley, Cheshire, in June 1878.7

At the age of 11 Charles emigrated from Glasgow on 3 November 1883 on the 'Loch Katrine' with his parents and three younger siblings. The ship was described as a 'Magnificent Iron Clipper Ship', and the Nicholsons travelled as second class passengers.8,2,9 Charles arrived at Melbourne on 4 February 1884 with his family. The voyage took a long 89 days. It is reported that the ship was popular, and the passengers had an agreeable time at sea.8,10,2

The Nicholsons were granted 90 acres of land at Tasmania on April 1884.11 Charles was employed A Charles Leigh Clare Nicholson was employed by the West Australian railways as a temporary clerk in their stores branch on Saturday, 23 July 1904 for the sum of 8 shillings a day, but was 'dispensed with' less than 2 moths later on 23 July 1904.12 He was a sharebroker and commission agent in 1906.13 He was the the manager of the Bischoff-Taylor Tin Prospecting Association, a company with a then capitalisation of £3,000 in July 1906 at Queenstown, Tasmania.14

On Tuesday, 16 July 1912 he was committed for trial at Queenstown, Tasmania on a charge of fraudulent conversion. The case revolved around an amount of £11 and a mixing of his accounts with the Mount Lyell Tourist Association. Although the Police Magistrate said that if it were up to him he would have acquitted Charles, he ultimately decided the only way to carry out his duty was to send the case onto the Attorney General. He was granted bail of 20 pounds.18,19

He listed in the newspaper August 1912 that he sold insurance, new and second-hand furniture, pianos and organs, go-carts and sewing machines; he also leased and sold houses 'without any deposit whatever'.20 Charles and Louise lived in 1914 at McNamara Street, in Queenstown, Tasmania.21

In October 1914 he brought a minor claim against a Mrs Wood concerning payment for furniture delivered.22 Charles Leigh Clare Nicholson petitioned for bankruptcy with liabilities estimated at £590 on 17 March 1915.23,24

His grand-daughter recalls that he may have worked for the Bank of Scotland. Charles and Louise lived in 1925 at at 177 Glenferrie Road in the Melbourne suburb of Glenferrie.29

Louise and Charles ran a strawberry farm Mount Dandenong Road, in Montrose, Victoria and their son Brandon would sometimes work there (and couldn't eat straewberries for years afterwards).30,17 His body was interred at Springvale Botanical Cemetery at the Melbourne suburb of Springvale. Plot: Church of England, Compartment N, Section 11, Grave 14.31

Charles died in 1930 at the Melbourne suburb of Hawthorn.32 After Charles's death, he was remembered as a banker on his son's death certificate 38 years after his death.33