She was recorded as living with her parents, a servant and her brothers Charles, Angus, George and Donald in the 1881 census at Plumley Moor, Plumley, Cheshire. She was recorded as being just 2 years old. Donald was actually her step-brother, the son of her father and her father's first wife.4

At the age of 5 Lily emigrated from Glasgow on 3 November 1883 on the 'Loch Katrine' with her parents and three older brothers. The ship was described as a 'Magnificent Iron Clipper Ship', and the Nicholsons travelled as second class passengers.5,6,7 Lily arrived at Melbourne on 4 February 1884. The voyage took a long 89 days. It is reported that the ship was popular, and the passengers had an agreeable time at sea.5,8,6

The Nicholsons were granted 90 acres of land at Tasmania on April 1884.9

In September 1907 it was announced that she had successfully coached a number of students through TLondon's Trinity College of Music examinations, some with very high marks.10 She was a witness at the wedding of her brother Charles Leigh Clare Nicholson and Louise Augusta Fooks at St. Martin's Church on Sunday, 8 December 1907 at Queenstown, Tasmania.11 Lily lived in December 1907 at Queenstown, Tasmania.12 The Nicholson family posed for a photograph c1910.

She married Albert Henry Fooks, son of Rev. Henry Samuel Cox Fooks and Jane Maria Murray, at Catholic Apostolic Church on Tuesday, 11 September 1917 at the Melbourne suburb of Carlton. She was 39 and her husband Albert was 35.17,18 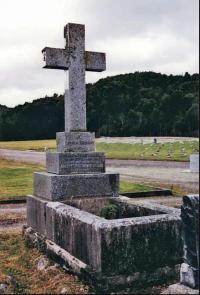