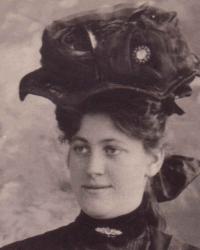 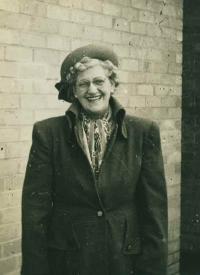 Violet was born on Wednesday, 11 April 1888 at North Melbourne, Victoria. Violet was born shortly after her parent's emigration from New Zealand. She was the daughter of Robert Cheyne and Agnette E. Sörum.

The family lived in three houses in quick succession; in 1891 they were firstly at 63 Flemmington Road, North Melbourne; then at 16 Gardner street in Richmond, then at 10 James Street Fitzroy where they settled and stayed until the turn of the century. This was a 5 room house owned by a Henry Wernberg.1,2,3,4 She presumably lived with her parents at at 116 Fitzroy Street in the Melbourne suburb of Fitzroy in July 1901.5,6

Her mother died 19 July 1901 at the approximate age of 50. Violet was aged 13 when this happened.5 She presumably lived with her father at at 121 Kerr Street in the Melbourne suburb of Fitzroy in 1905 She probably lived in the same house until she was married.7

She married Albert Edward Oaten, a boot-last maker, son of Charles Henry Oaten and Catherine Carroll, in a Congregational Church ceremony at at the manse 101 Gore Street on Wednesday, 24 November 1909 at the Melbourne suburb of Fitzroy. She was 21 and her husband Albert was 21. Witnesses to the wedding were Robert Cheyne and Charles Henry Oaten.8,9 At this time her occupation was given as a confectioner.8

Her father died 1 March 1913 at the approximate age of 60.. Violet was aged 24 when this happened. Violet, aged 25 and Albert Edward Oaten, aged 25 became the parents of Mavis Lily Oaten on Thursday, 1 May 1913 at at 15 Coleman street in the Melbourne suburb of North Fitzroy.14,15 Violet and Albert lived in 1914 at North Fitzroy. They were to stay in this house for another four years.16 Violet had a photograph taken of her on 7 February 1914.

Her husband Albert died 2 May 1919 at the age of 31, leaving her a widow at age 31. He died of influenza during the epidemic.

In another cruel blow, the fourth death in 18 years, their other brother Albert died at the age of 33 on Saturday, 3 May 1919. Violet was 31 when this happened.

OATEN.— In loving memory of my dear husband and father, Albert Edward, who died 2nd of May 1919, also our dear brother Albert Robert, who died 3rd May 1917
Just when his life was brightest,
Just when his hopes were best;
He was called away from his loved ones
To a home of perfect rest
If we could have our wish fulfilled
Or choose from heaven what we willed.
Dear husband and daddy, we would ask for you.
We cannot run to meet you daddy,
Or climb upon your knee;
But let this little token tell
We still remember thee.
Inserted by his sorrowing wife and children.17

For the next 5 years, Violet and her children moved addresses a number of times. In 1924 she was living at 162 Queens Parade in North Fitzroy, then seven years later was at 3 Groom Street.18,19 She was a boxmaker in 1924.18 She was recorded as engaged in homeduties, and further records have her doing this as well in 1931.19 Although there is no evidence to confirm that she attended the wedding, her daughter Mavis married Hubert Nicholson on Saturday, 17 February 1934 at the Melbourne suburb of Kew.20,21

She married Thomas Charles Gosstray, son of Ben Gosstray and Mary Elizabeth Chinnock, in 1953 at Kew.28 Violet and Thomas lived in 1954 at at 19 Rowe Street in the Melbourne suburb of Ivanhoe.29 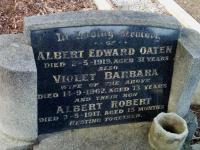 Headstone for Violet, her first husband and their son
Her body was interred at Coburg Pine Ridge Cemetery on 17 September 1962 at the Melbourne suburb of Coburg. She is buried in the Church of England section in plot CO-COE*D***543 with her first husband, Albert, and her young son Albert..32,33