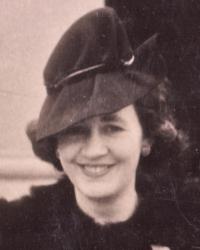 Mavis was born at 15 Coleman street on Thursday, 1 May 1913 at the Melbourne suburb of North Fitzroy.1,2 She was the daughter of Albert Edward Oaten and Violet Barbara Cheyne. She presumably lived with her parents at North Fitzroy in 1914. They were to stay in this house for another four years.3 A picture was taken of Mavis January 1916 when she was 2 years and 6 months old.

Her father died 2 May 1919 at the age of 31. Mavis was aged 6 when this happened. He died of influenza during the epidemic.

For the next 5 years, Violet and her children moved addresses a number of times. In 1924 she was living at 162 Queens Parade in North Fitzroy, then seven years later was at 3 Groom Street.4,5 The following story relates to how Hubert 'Boy' Nicholson and Mavis 'Micky' Oaten met: Mavis and Hubert's sister Jeanne both worked at the Coles Department Store in Glenferrie Road. Jean invited Mavis home to their house in Coppin Grove, and it started there. Hubert's teenage brother Bon was also attracted to Mavis, but it was the older Hubert who won out.6 At this time her occupation was given as a shop assistant at Myer's department store in her early years. Mavis and Hubert Nicholson became the parents of Leigh Donald Nicholson in 1934 at Victoria.7

Mavis and Hubert lived in 1936 at at 97 Illawarra Road in the Melbourne suburb of Auburn. They were to stay there for about the next two years.10

After their marriage, Hubert and Mavis moved in with his mother at 2 Coppin Grove in the Melbourne suburb of Hawthorn.6 Mavis and Hubert had a number of other children between 1935 and 1941 but all of them except Barbara died young. There is some speculation that this is because they had congenital birth defects due to their parent's incompatible blood types that resulted in clotted blood (Margaret), being born with half a bowel and septisemia.6 Mavis and Hubert lived in 1942 at Hawthorn. They stayed there until they went overseas; on their return at the end of the decade they went back to Coppin Grove.11,12 Mavis and Hubert lived circa 1948 at Great Bookham, Surrey. They remained there for three years in the late 1940's.6 Mavis Lily Oaten and Hubert Nicholson were found on a passenger list on the Strathnaver on 5 January 1950 from London to Melbourne. They were returning home from Hubert's posting to England Travelling with them were their children, Barbara and Graham. They reached Australia on 1st February 1950.13,14

Mavis died on 21 October 1990 at Melbourne at age 77.16 Her body was interred at Springvale Botanical Crematorium at the Melbourne suburb of Springvale.16

Mavis's will was probated on 20 September 1991. And her estate was valued at $1,748.65, made up predominantly of shares and some minor items of jewellery.17