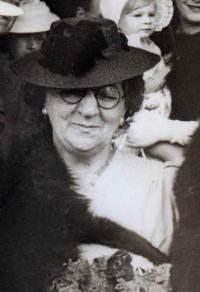 Lily Hawthorne Cheyne c1940
NOTE: The information on this page is my research to date and is subject to change as I become better informed. I very much welcome any corrections or additional info you might have - my email address is at the bottom of this page. Whilst historical facts are not copyright, my writing about these facts are. If you wish to use any text from this site on Ancestry or on any other website, please ask me first - Tim Hill.
+ + + + + + + + + +

The family lived in three houses in quick succession; in 1891 they were firstly at 63 Flemmington Road, North Melbourne; then at 16 Gardner street in Richmond, then at 10 James Street Fitzroy where they settled and stayed until the turn of the century. This was a 5 room house owned by a Henry Wernberg.5,6,7,8 She was confirmed on 11 July 1897 at St. Peter's Eastern Hill, in Melbourne.9 She presumably lived with her parents at at 116 Fitzroy Street in the Melbourne suburb of Fitzroy in July 1901.10,11

She married Henry John Barrett, in 1906 at the Melbourne suburb of Fitzroy. Witnesses to the wedding were Robert Cheyne.13

In another cruel blow, the fourth death in 18 years, their other brother Albert died at the age of 33 on Saturday, 3 May 1919. Lily was 34 when this happened.

One year after Albert's death his sister-in-law Lily Hawthorne Cheyne published a memorial in the paper:
OATEN.— In loving rememberence of our dear brother-ln-law, Albert, who passed away on the 2nd May, 1919.
One of the best. Gone but not forgotten.
— Inserted by Lily and Harry Barrett.14

Lily died in August 1948 at the Melbourne suburb of Richmond at age 64.3