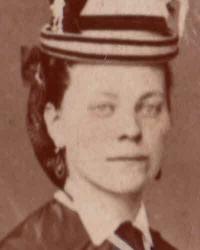 Agnette E. Sörum was also known as Sollum.2 Agnette E. Sörum was also known as Agnetta.3 NOTE: The information on this page is my research to date and is subject to change as I become better informed. I very much welcome any corrections or additional info you might have - my email address is at the bottom of this page. Whilst historical facts are not copyright, my writing about these facts are. If you wish to use any text from this site on Ancestry or on any other website, please ask me first - Tim Hill.
+ + + + + + + + + +

Agnette sought and obtained assisted passage to New Zealand as a 'maid servant.6'

Agnette emigrated from Hamburg, Germany, on 28 July 1872 on the 'Palmerston'. The ship was a 950 ton four masted iron ship, built as a steamer and convered into a sailing ship.4

A contemporary account of the voyage was kept by one of the passengers on 10 August 1872:
"10 August 1872 Bad behaviour of two German girls who went to bed in the evening with two of the ships sailormen, it came before the Captain who went to the sailors quarters with a whip in his hand and laid it on pretty heavy on the cohabiters in bed, and the unlucky poor girls had to leave the sailors sweet company, with the only garment of a nightdress and had to wait for their clothing till late next morning. Small quantities of black ryebread was supplied to each platoon or ward, and then dog biscuits. All our black bread we had from Hamburg is consumed by this time, only liquid now."7

They were subject to duplicitious behaviour from the captain on 25 August 1872:
"25 August 1872 One man dead today belonging to Norway. He was a widower and had 4 children. The three he left in Christiana and the fourth which was 10 years of age was on board. With him a rumour was circulated amongst the passengers that the man had been stealing a bottle of poison from some person on board so as to poison himself thereby."

However, this was untrue - he was killed by the crew botching the weekly fumigation.

"Some ugly rumour soon passes amongst the passengers relating to the poor mans death, that gave the Captain some concern, as he did not like to have an investigation of the unlucky circumstances after the arrival in New Zealand because he would know it would likely be a serious matter for him and the steward, therefore he told the people on board that it was his intention to take the boy belonging to the dead man to bring him up himself as he had no children. That promise gave satisfaction to some of the passengers, not knowing the devious side of that promise by the Captain. The boy (later noted), was kept on board the ship until the last day before going away then the boy was told that he was to travel along with some person to serve in Oamaru district and to have a different name instead of his own. That was meant so he could not be traced by any of his ships companions, so ended that honourable promise of a German Ships Captain."8

During the voyage they traversed some extremes of climate on 16 September 1872:
"16 September 1872 We are nearly over the strong hot climate ... our passage across that Godforsaken part of our travel lasted almost for three weeks, and full of suffering for good many of the passengers. The first part of the three weeks was very still scarcely a breath of wind and in consequence thereof did the rigging of ropes and tackle stretch and constantly slack and therewith make an intolerable noise to such an extent that it seemed that the whole rigmarole would break down ... our water tanks were almost empty at these times and the little which was left got rotten of the abominable heat and was churned backward and forward in the tanks. Then there was the rust from the old iron chains, so a good dose of vinegar was put down in the few buckets of water so as to take the bad taste of rust, for all that it was a horrible drink. It made even coffee or tea smell and tasted rotten"

However relief was not far away.

"it started with a down pour of rain like it came from a sluice gate. Men and boys undressed themselves and laid down on the deck for a warm bath and drank rain water till they were nearly bursting. Canvas was spread in the lower rigging so as to catch the rain water for the tanks."8

It was not an easy voyage on 13 November 1872:
"13 November 1872 Until today's date are 17 children born and 15 dead in this ship all told, of less than 300 passengers and far from the end of the voyage. It is today the Captains Birthday, consequently a great flare up in the evening and all the men got a big knobler of brandy and the women folk got wine. The children each a packet of currants and prunes. And afterwards dancing and also some sing song. For all that, the corpse of a boy was laying ready for to be sent to the bottom of the Pacific Ocean. But he was put at the one end and the dancing was at the other end of the married passengers saloon."

The diarist described the accomodation:

"I will give a little description of the interior of that Compartment which serves for bedrooms, dining room, sitting room, tea room, and I may mention dressing room also and in bad weather as laundry. Therefore it cannot be wondered at that so many unlucky children have to go overboard and the worst of all in extra bad weather the Gangway from below on to the deck is always blocked by fastening the hatches over the sternway to prevent the seawater and heavy rain to come down in the Saloon which contains first, second, and third class passengers, but no distinction in the crowd. We are all as one in our unhappiness and painful surrounds, Because here in this ship are happenings going on which can baffle and astonish the most astute person. Our Quarter (excuse me) Saloon is midship about 130 feet long and the full width of the ship, 40 ft.
The bunks or shall I call them beds are on the two and two principle, one above the other and 3 ft 6 in broad but how long I will not mention ... the seats along the tables, for we have no chairs, are top heavy and cannot stand by themselves when they are not lashed by weight of occupation when heavy seas are running and that is almost every day and night. This is called the Pacific Ocean, but oh what a misnomer - truly. The single mens habitation is forward of ours and girls or unmarried women just behind, the reverse would not do as the crew occupy the forward part and the Captain and the Doctor and other officers also as well as the Hospital and Chemist Shop."8
After a voyage of about 5 months Agnette arrived at Canterbury, New Zealand, on 16 December 1872.4,9

The 'Otago Witness' reported on the passengers from the 'Palmerston' on 28 December 1872:
"The German and Scandinavian passengers per Palmerston were admitted to pratique on Monday, and brought to town by the first trip of the P.S. Golden Age. They look a fine, tall, and healthy lot. The families from this ship who have been infected with scarlatina are located at the small island, the two cases affected being looked after in isolated tents on the island, while the others are located in lighters in attendance."10
She presumably lived with her spouse Robert at Dowling Street, Dunedin, Otago, New Zealand, in 1880.11

She may have married Robert Cheyne, son of James McCheyne and Elizabeth Hawthorne, circa 1882 at New Zealand. Robert's death certificate indicates that he was married at the age of 29, and Agnette's stated she married at age 28. However, the birth certificate for their second child (born in 1884 when they were both older than these stated ages) indicates that they were not, at least at that stage, married..12,13,14 Agnette E. Sörum was also known as Cheyne.13 She presumably lived with her spouse Robert at Castle Street, Dunedin, Otago, New Zealand, in 1887.15

The family lived in three houses in quick succession; in 1891 they were firstly at 63 Flemmington Road, North Melbourne; then at 16 Gardner street in Richmond, then at 10 James Street Fitzroy where they settled and stayed until the turn of the century. This was a 5 room house owned by a Henry Wernberg.16,17,18,19 Agnette E. Sörum witnessed the confirmation of her daughter Lily Hawthorne Cheyne on 11 July 1897 at St. Peter's Eastern Hill, in Melbourne.20 Agnette E. Sörum was a housewife in July 1901.14 Agnette (and presumably his spouse Robert) lived in July 1901 at at 116 Fitzroy Street in the Melbourne suburb of Fitzroy.14,21