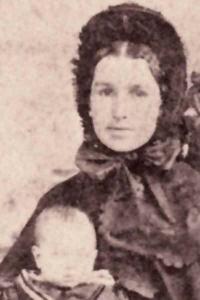 She married Hugh Joseph Sutherland, a wheelwright from Scotland., son of Hector Hugh Sutherland and Margaret Mckay, in a Wesleyan ceremony at the house of Donald Nicholson on Tuesday, 31 October 1865 at Forbes, New South Wales. Although not the oldest child, she was the first to be married - she also seems to have understated her age by as much as two years. Witnesses to the wedding were Donald Nicholson and Margaret Brown.4

The Nicholson and Sutherland families both came from the Couty of Sutherland in Scotland's remote north - this may be one of the reasons why these families bonded together throguh the marriage of Hugh and Margaret. Margaret and Hugh Joseph Sutherland became the parents of Grace Sutherland in 1866 at Forbes, New South Wales. Grace was the first of eight children born to her parents..5 However, Grace died young, as did the first child of Margaret's mother and her brother James. Eight more children were born to Hugh and Margaret, mainly in Forbes and Parkes. Seven of those children eventually married.

Her mother died 22 May 1874 at the age of 56.6,7 She was a witness at the wedding of Michael Bourke and her sister Susannah Alletta Nicholson at her father's house on Saturday, 26 December 1874 at Parkes, New South Wales.8 Margaret provided information for the birth of James John Bourke, on 26 December 1874 at Forbes Street, in Parkes, New South Wales. James was apparently born on the same day as his parent's wedding (although it is not known which of these two events happened first on this rather momentous day). James was to be the first of four children born to Michael and Susannah, but did not live much beyond his first birthday.9,7

Margaret was instrumental in arresting a burglar: in May 1875:
One of the new comers had a stop put to his little game for a few months at, least last week, by getting fully committed to stand his trial, at the next quarter sessions at Forbes, for burglary. He gives his name as William Jones. He was first noticed as a suspicious character by Mrs. Sutherland. She therefore watched his movement!, and saw him go to the back window of Mr.. Charles Guigni's jeweller's shop, and then return and look up and down the street. He then managed to get in. She soon afterwards heard the noise of wood being broken, and she then gave the alarm to Dr. Austin, Mr. P. B. Cooke, and several others who were standing on the verandah of the Royal Hotel.10
She and Hugh Joseph Sutherland moved to Cobar, New South Wales, circa 1880.11