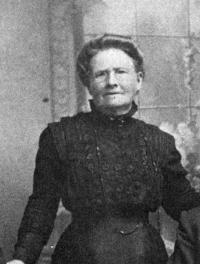 Lydia Hosnell 1906
Source: Bob Stephenson
NOTE: The information on this page is my research to date and is subject to change as I become better informed. I very much welcome any corrections or additional info you might have - my email address is at the bottom of this page. Whilst historical facts are not copyright, my writing about these facts are. If you wish to use any text from this site on Ancestry or on any other website, please ask me first - Tim Hill.
+ + + + + + + + + +

Lydia Horsnell was also known as Lydia Hosnell. Lydia was born on Saturday, 30 July 1853 at Long Swamp, New South Wales.2,3 She was the daughter of Thomas Horsnell and Martha Goddard.

By January 1857 the Horsnell family was in desperate circumstances and an appeal was made for charity in January 1857:
"TO THE BENEVOLENT.
THE attention of the benevolent Public is solicited to the case of Mrs. Horsnell, widow of the late Thomas Horsnell, of the Long Swamp, near Mulgunnia who was recently killed by a fall from horse, leaving his wife and seven children almost in a state of complete destitution.
Donations will be thankfully received at Carcoar by the Rev. H. Tingcombe, E. J. C. North, N. Connolly, and B. Stimpson, and by W. Farrand, Esq. Free Press Office, Bathurst."5

She married James Brown Nicholson, son of Donald Nicholson and Margaret Brown, at St. Michaels and St. Johns Catholic Cathederal on Sunday, 20 August 1871 at Bathurst, New South Wales. She was 18 and her husband James was 28. Lydia at the age of 18 was ten years younger than James.. Witnesses to the wedding were Sarah Hosnell.3

Lydia Horsnell and James Brown Nicholson Between 1872 and 1895 James and Lydia had at least a further eight children, six of whom lived to their adulthood. All of them were born in central NSW, mainly at Hillston and the copper mining town of Mt. Hope. on 1 January 1873.

"They came to Mount Hope on a horse and dray. Auntie Maggie (Margaret Grogan nee Nicholson) and Uncle Jim (James Hosnell Nicholson) were both kids at the time, in those times there were no roads, just tracks through the Mallie, no water. They carried a square 100 gallon tank with them for their water and filled it whenever it rained, or if they heard of a tank 3 and 4 miles off the road they would go into fill up at the tank. They travelled mostly at night to try to preserve the water and the benefit of the horses. When they eventually got to Mount Hope they first of all lived at 17 mile tank Coan Downs Station and grandfather (James Brown Nicholson) got a job working on the station for a pound a week and rations for his family which they called in those days "ten-ten-two and a quarter" - ten pound of meat, ten pound of flour, two pound of sugar and a quarter of a pound of tea. Anything else they required they had to buy from the store on the station. All big stations had stores those days.
It was a very dry time and he was ordered by the station manager not to give a traveller with a horse or pack horse a drink of water for their horse. But old grandfather gave everything a drink that came along. The station manager came out one day and caught him giving a traveller a drink for his horse and he got the sack. Well they went from there up to Central which in later years became a sort of suburb of Mount Hope and they built a bit of a shack out of timber from the bush in the paddock there alongside a row of hills which is still today called Nicholson Hills. That's where Dad (William Henry Hosnell Nicholson) and Uncle Jack (John Nicholson) were born. They eventually shifted from there up to Central itself and grandfather opened a butcher shop there and later another butcher shop at Mount Hope and then later on they had a butcher shop at Mount Allen. That was considered real big in those days, it would be like Tancreds today. From there they came to Shuttelton where dad and Uncle Jim opened a butcher shop and Uncle Jack went onto Nymagee and he opened a butcher shop there and eventually a hotel".6

Lydia Horsnell was she ran a boarding house circa 1900 at Shuttleton, in Nymagee, New South Wales.6

Her husband James died 16 October 1900 at the age of 57, leaving her a widow at age 47.7 Lydia provided information on the death of her husband James Brown Nicholson, on 16 October 1900, at Hillston, New South Wales, at age 47. James died of Brights Disease, which is associated with an inflammation of the kidney. The illness had lasted 6 days..7 Lydia lived in 1903 at at 42 Glassop Street in the Sydney suburb of Balmain. as a domestic.8 In 1906 the surviving Hosnell siblings posed for a photograph.9