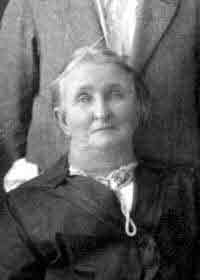 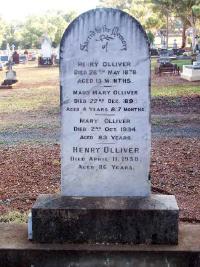 She married Henry Olliver, son of William Olliver and Elizabeth Ann Grubb, in a Presbyterian ceremony at her father's house on Sunday, 8 September 1872 at Bushman's Lead, New South Wales. She was 20 and her husband Henry was 21. Henry was a local blacksmith.. Witnesses to the wedding were Susannah Alletta Nicholson, Donald Nicholson and Margaret Brown.8

Her mother died 22 May 1874 at the age of 56. Mary was aged 21 when this happened.10,11 She presumably lived with her spouse Henry at Victoria Street, in Parkes, New South Wales, circa 1889. Henry and Mary were to remain there for another 45 years (after having lived in three other houses in town).9,5 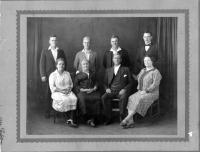 Photograph by User
She and Henry Olliver celebrated their diamond wedding anniversary on 8 September 1932. 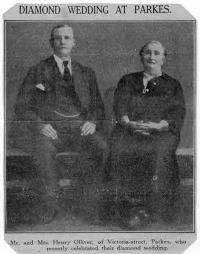 Mary was memorialised in an obituary on 8 October 1934:
" ...Of a deeply religious nature Mrs. Olliver attended the Presbyterian Church regularly until recently, and brought her family, to whom she was devoted, up in a way which made, them honored throughout the district.
The family, of whom two are deceased, is as follows: William (Dundas), Margaret (Mrs. F. P. Goudge, of Parkes), Alexandria (Mrs. A. McDougall, Sans Souci), Hughie (New Zealand), Arthur (Sans Souci), James (Bondi), Hilton (New Zealand) and Jack (Young). There are also 30 grandchildren and 17 great, grand children.14