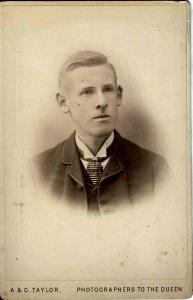 likely photograph of Charles Breach
(source: M. Willson)
NOTE: The information on this page is my research to date and is subject to change as I become better informed. I very much welcome any corrections or additional info you might have - my email address is at the bottom of this page. Whilst historical facts are not copyright, my writing about these facts are. If you wish to use any text from this site on Ancestry or on any other website, please ask me first - Tim Hill.
+ + + + + + + + + +

Charles was born on Sunday, 7 February 1869 at Barton upon Irwell, Manchester.1,2 He was the son of James Child Breach and Emma Miller. Charles Edgar Breach was baptized at Congregational church in March 1869 at Old Trafford, Lancashire.1

He was recorded as living with his parents in the 1871 census at 25 Hulton St., Moss Side, Manchester. He was recorded as being just 2 years old.3 A photograph was taken of the Breach family circa 1880 in Sale.


He was recorded as living with his mother, a 16 year-old niece, an aunt and his siblings Harold, James, Leonard and Ida in the 1881 census at Marlborough Road "Woodstock", Sale, Cheshire. He was recorded as being 12 years old. It isn't known where his father was.4

He married Rebecca Drewry, at Independent Chapel on Saturday, 27 September 1902 at Fleetwood, Lancashire.8,9

He was recorded as head of household in the 1911 census with Rebecca Drewry as his spouse at Poulton-Le-Fylde, Lancashire. He was 42 years old. They were recorded as living in a seven room house.11 Charles Edgar Breach was as a commercial salesman for a wallpaper manufacturer.11

Charles's brother Frank began military service on Saturday, 3 July 1915 when he enlisted in the 19th Dragoons at Canada at age 31.12

On 5 June 1934 he arrived in New York on the 'Laconia', returning to Liverpool four months later from Montreal on the 'Antonia'.15,16

On 5 July 1935 he departed from Liverpool on the 'Andania' arriving at Montreal, Quebec nine days later. He passed into the United States in early August, and remained in the United States for six weeks before returning to Liverpool from Montreal on the 'Antonia'.17,18,19 Charles Edgar Breach was described as being 5 foot 8 inches with blue eyes in 1935.18

A bare six months after his last trip, he departed from Liverpool for New York on the 'Andania' arriving in the first week of April. He vistited Canada before returning to Liverpool.19,17,18

In September 1937 he departed from Liverpool to Jamaica on the 'Orbita', arriving in San Francisco presumably via the Panama Canal on the 16th November 1937.17,20 He was found on a passenger list on the Cunard White Star ship 'Samaria' on 25 July 1938 from Boston to Liverpool.21

On what may have been his final voyage, he left England December 1938 , travelled to New York and then on to Florida. He returned to Liverpool in April of 1939.17,22,23,24 Charles lived in April 1939 at Priestcroft, in Poulton-Le-Fylde, Lancashire.24