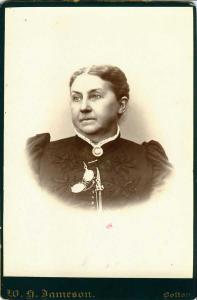 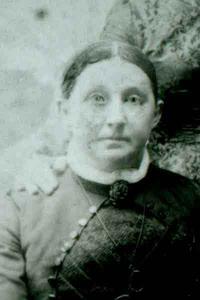 Lizzie Miller c.1885
NOTE: The information on this page is my research to date and is subject to change as I become better informed. I very much welcome any corrections or additional info you might have - my email address is at the bottom of this page. Whilst historical facts are not copyright, my writing about these facts are. If you wish to use any text from this site on Ancestry or on any other website, please ask me first - Tim Hill.
+ + + + + + + + + +

Lizzie Miller was recorded as a visitor to the household of James Smith and Alice (?) in the 1861 census at Brighouse, West Yorkshire.9 Her occupation was recorded as being a saleswoman in the census.9

During hard times the Miller family was a support to Cuerden Mill, especially with its school in January 1863:
"The relief generally is administered under the superintendence of Mr. Daniel Arkwright, manufacturer, of Preston, who from the first, and in consequence of his business connection with Cuerden Mill, has taken a very active and laudable part in attending to the wants of the operatives, and in carrying out the liberal measures proposed by the Messrs. Dewhurst. Mr. Robert Miller, manager at the mill, also labours most assiduously in supervising and directing the relief administered. But this is not all. About two months ago this firm decided to open an industrial school in one of the rooms of their mill-in the cloth warehouse, a light, well-ventilated place to the north-east of the establishment. It is supported by the Messrs. Dewhurst and Mr. R. Townley Parker, of Cuerden Hall. The former admit a number of their own hands; the latter gentleman, by his contributions, makes provision for several females residing more immediately in his own neighbourhood. The school is open four days a week - Mondays, Tuesdays, Wednesdays, and Thursdays - from nine till twelve, and from one till four. The average daily attendance is 150. Each of the temales receives 6d per day, or 2s. per week. They make shirts, chemises, petticoats, &c, for the Bamber Bridge Relief Committee. Mrs. Miller, the Misses Miller, of Cuerden, Miss Wignall, of Bamber Bridge Parsonage, and Miss Barton visit and superintend the school. When we visited it, all the females were at work. A more cheerful, busy, or contented place we never saw. No traces of distress were visible here. All were sewing away pleasantly, and everything seemed to be going on merrily. The girls were scrupulously clean, and a more rosi-faced, neatly-dressed class of females we hardly ever beheld."10

Her mother died 7 September 1869 at the approximate age of 58 years. Lizzie was aged about 29 when this happened.14

Lizzie Miller was recorded as the spouse of John Jameson in the 1871 census at 25 Arkwright Street, Bolton, Lancashire. She was recorded as being 31 years old. Also recorded as living inthe house were three boys between 12 and 17 with the surname 'Gooden', and it is stated that they were sons. The relationship with these boys isn't clear; their parents were still alive, just visitors in a house in Leicestershire on census night.3 She presumably lived with her spouse John at Little Bolton, Lancashire, in April 1874.15

Lizzie Miller was recorded as the spouse of John Jameson in the 1881 census at Bolton, Lancashire. She was recorded as being 41 years old, and their young family lived with them.17

Her husband John died 26 January 1885 at the aproximate age of forty four, leaving her a widow. She was left with four children aged about six to eleven.

John Jameson's will was probated on 20 February 1885. It had a value of £1,742 8s. 11d. with Eliza being the sole executrix and beneficiary..18 At least two photographs were taken of the Miller sisters, perhaps for Patty before she left for the colonies, never to return. Eliza gave an unknown person a leather-bound photograph album engraved with the date 3 November 1885 - the album still exists with many photographs from this period. 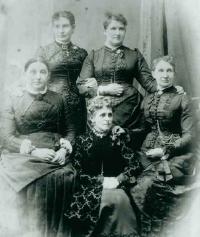 A photograph was taken of the back of Mrs Jameson's house.

She was recorded as head of household in the 1891 census at 106 Park Road, Bolton, Lancashire. She was living with her three sons aged 17 to 11, her daughter aged 13 and a servant.19 Her occupation was recorded as being an umbrella maker and an employer in the census. Her two oldest sons appeared to be working with her.19