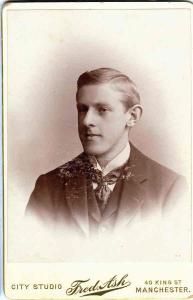 likely photograph of Leonard Breach
(source: M. Willson)
NOTE: The information on this page is my research to date and is subject to change as I become better informed. I very much welcome any corrections or additional info you might have - my email address is at the bottom of this page. Whilst historical facts are not copyright, my writing about these facts are. If you wish to use any text from this site on Ancestry or on any other website, please ask me first - Tim Hill.
+ + + + + + + + + +

He was recorded as living with his mother, a 16 year-old niece, an aunt and his siblings Charles, Harold, James and Ida in the 1881 census at Marlborough Road "Woodstock", Sale, Cheshire. He was recorded as being 5 years old. It isn't known where his father was.3

He was recorded as living with his mother and his siblings Charles, James, Ida and Frank in the 1891 census at Breadstone Hall, Reddish, Stockport, Cheshire. He was recorded as being 16 years old.. They also had a domestic servant, Margaret.4 His occupation was recorded as being a scholar in the census.4 Leonard Breach was found on a passenger list on the 'Etruria' on 18 March 1893 from Liverpool to New York. He was listed as a mechanic and was aged 15.5 He was an electrician in April 1894.6 He was found on a passenger list on the 'Umbria' on 23 April 1894 from New York to Liverpool. He had spent more than a year overseas.6

On 6 April 1909 he was elected to the Institution of Civil Engineers.9

He was recorded as head of household in the 1911 census with Paulina Dickinson as his spouse at 34 Russian Drive, Liverpool. His age was recorded as being 33. Also in the seven-room house were their two young children and a servant.10 Leonard Breach was a superintendent in the Electrical Engineering Corporation Electrical Department.10

Leonard's brother Frank began military service on Saturday, 3 July 1915 when he enlisted in the 19th Dragoons at Canada at age 31.11 Leonard and Paulina lived in December 1920 at 59 Bankfield Road, in West Derby, Liverpool.12 Leonard Breach and Paulina Dickinson were found on a passenger list on the 'Empress of France' on 23 December 1920 from Liverpool to St. John, New Brunswick.12 Leonard Breach was an electrical engineer in May 1921.13

Leonard may have died circa September 1965 at Liverpool North Registration District.15