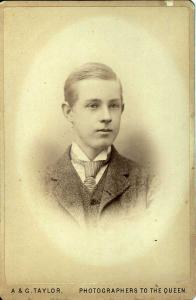 likely photograph of Harold Percy Breach
(source: M. Willson)
NOTE: The information on this page is my research to date and is subject to change as I become better informed. I very much welcome any corrections or additional info you might have - my email address is at the bottom of this page. Whilst historical facts are not copyright, my writing about these facts are. If you wish to use any text from this site on Ancestry or on any other website, please ask me first - Tim Hill.
+ + + + + + + + + +


He was recorded as living with his mother, a 16 year-old niece, an aunt and his siblings Charles, James, Leonard and Ida in the 1881 census at Marlborough Road "Woodstock", Sale, Cheshire. He was recorded as being 9 years old. It isn't known where his father was.2

Harold Percy Breach emigrated from England at about the age of eighteen.4 He arrived circa 1890 at U.S.A.4

In April 1894 he travelled to New York on the 'Umbria', after an unknown stay in England. He was to return - presumably briefly - to England just before Christmas.5,6 He was a salesman in December 1894.6 He was found on a passenger list on the 'Saxonia' on 2 August 1902 from Boston to Liverpool.7

He married Florence S. Slade, circa 1906 They were to remain childless.8 Harold (and presumably his spouse Florence) lived in 1908 at 754 7th Street, Buffalo, New York. They were to remain living here for at least 49 years.9 Harold Percy Breach was a manager for Charles F. Slade Company, a firm perhaps associated with his wife's family in July 1908.10,9

Harold returned to England with his wife Florence for about six weeks in July 1908, departing from Montreal. They undertook a similar six-week trip four years later. However, most of the voyages he was to take to England were without his wife.10,11,12

He was recorded as head of household in the 1910 census with Florence S. Slade as his spouse at Buffalo, New York. He was 38 years old. Also living in the house was Florence's brother.8

Harold's brother Frank began military service on Saturday, 3 July 1915 when he enlisted in the 19th Dragoons at Canada at age 31.13

He was recorded as head of household in the 1920 census with Florence S. Slade as his spouse at Buffalo, New York. He was 47 years old.4

Harold Percy Breach was naturalized on 3 August 1921 at Buffalo, New York.14 He and Florence S. Slade were found on a passenger list on the 'Araguaya' on 10 March 1927 from Bermuda to New York.15

In May 1927 he returned to England for nine months, returning to New York just after Christmas.16,17

He was recorded as head of household in the 1930 census with Florence S. Slade as his spouse at Buffalo, New York. He was 58 years old.18

The next year is a little unclear, except that he seems to have made at least 5 - but in all likelihood perhaps eight - transatlantic trips in the 15 months from April 1931, at least one in conjunction with his brother Charles.14,19,20,21,22 Harold Percy Breach was an office manager for Rolls Chemical Company in 1934.23 He was found on a passenger list on the Cunard White Star ship 'Samaria' on 23 February 1937 from Boston to Liverpool.24

On July 1938 he appears to have returned to England for five months, returning home just before Christmas, only to depart again four months later with his brother Charles (visiting again) to England for four months.25,26,27,28 He was a retired person in April 1940.29

He was recorded as head of household in the 1940 census with Florence S. Slade as his spouse at Buffalo, New York. He was 68 years old.29