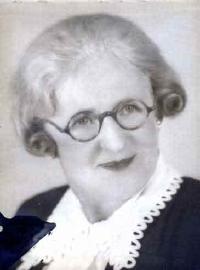 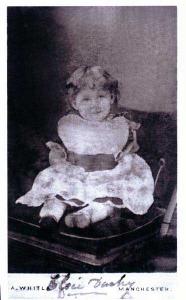 
At the age of 1 Elsie emigrated from London on 25 December 1885 on the R.M.S. 'John Elder' with her mother and two sisters.They were on their way to join their father who was already in the colony. Elsie was not even two years old.4 Elsie arrived at Port Adelaide, South Australia, on 9 February 1886.5

Elsie was listed on the Rockford roll as a student at Mylor, South Australia. She attended school there at about the age of 8 from 1892 until October 1894 when the Mylor school opened..6 In December 1892 the Darby family had a grand piano at home, as it was lent for the cause of a fundraiser to build an institute and hall for the 700 or so residents.7 On 5 December 1892 there was a visit by legislators (including an M.P.) to the Darby property at Mylor where someone noted that George and his family had the best house in the district. There was perhaps a suggestion that this was inappropriate give George's position in the Land Office. Later that night, George and his wife and daughters contributed items to the programme of the concert in the evening.8

George The town was described on 16 December 1892:
...Mylor is emerging from the embryo stage of exist ence. Most of the blocks have been sold at prices satisfactory to the Government. At present nothing can be seen except a general store, a carpenter's shop, and the frame of the local Church of England building. The rest is all a partially-cleared area backed and planted by gumtrees and scrub near the old stock road to Scott's Creek.9
A suggestion that the Darbys had the best house in the district was refuted by a T. Murphy (and in a different newspaper, 'Thomas H. Winkworth') who said that Mr. Hughes had a much finer house and that the Darby House was only 2 stone rooms, like several other houses.10,11 Elsie was listed on the roll as a student at Mylor School, in Mylor, South Australia, on 8 October 1894. She attended school there until September 1897 at the age of 13..12

On 13 February 1896 Sir Fowell Buxton vistited the area and 12 year old Elsie Florence Darby was one of two girls chosen to present the Governor with a basket of apples and grapes to give to his wife.14

In November 1896 she won a prize at the Public Schools Floral and Industrial Society at The Exhibition Buildings, in Adelaide for a herbarium with over 100 native plants.15,16

In January 1898 there was a bushfire in Mylor that affected the Darby's place. This occurred on a hot and windy day, and there were about 35 people fighting the fire, which saved the house, trap and horse. In all, about 100 acres were burned. Whilst initial reports said that fruit trees, sheds, clothing etc were destroyed, another correspondent said about a dozen fruit trees were burnt. On the contrary, the worst sufferer seemed to be a Mr. Wake who had moved some of this things to the Darby's that day.17,18

The Darby's sufferred another unsettling incident involving a horse carriage on 4 May 1902:
"SERIOUS VEHICLE ACCIDENT. Mr. G.L. Darby (chief clerk of the Woods and Forests Department), whilst driving to his home from Aldgate station on Monday evening with his daughters, met with a serious accident. The horse stopped suddenly, and in doing so broke a portion of the harness. The animal then bolted round a curve at the foot of a steep hill, throwing out all the occupants of the vehicle. Mr. Darby's ankle was broken, and he was removed to the Adelaide Hospital. His daughters received a severe shaking and abrasions."19,20


We can't know how Elsie and James met, but it may have been through a family association. James's father was a lighthouse keeper and Elsie's cousin John Darby was Secretary of the Marine Board; both men had met Arthur Searcy and John Darby must have known him well. Elsie lived in 1904 at Adelaide.21

She married James Smith, a clerk, son of Walter Thomas Smith and Lucy Deane, at "Kiliora"(?) Stanley St. on Thursday, 22 December 1904 at North Adelaide. She was 20 and her husband James was 23. Elsie was 5 months pregnant when she married; the effect of this on Elsie's strict Wesleyen Methodist mother isn't known however it is notable that Elsie and James married at Elsie's parent's home and not the Congregational church that her sisters were married in. Witnesses to the wedding were Mabelle Gertrude Darby and Patty Miller.22 Elsie, aged 21 and James Smith, aged 23 became the parents of Heba Gwendolyn Smith on Tuesday, 11 April 1905 at North Adelaide.23,24,25 Elsie and James lived in March 1907 at MacKinnon Parade, in Adelaide.26 Elsie, aged 22 and James Smith, aged 25 became the parents of Margery Jean Smith on Sunday, 31 March 1907 at MacKinnon Parade in McDonald Ward, in Adelaide.26 Elsie and James Smith became the parents of Walter Leonard Smith circa 1911 at South Australia.27,28 A picture was taken of Heba and Margery Smith, their parents and their grandmother.

Her mother died 22 December 1921 at the age of 71. Elsie was aged 37 when this happened. She and James Smith moved with their three daughters to Wagga Wagga, New South Wales, circa 1923. However, they only stayed there a year before moving to Sydney.29

Her father died 3 July 1926 at the approximate age of 76. Elsie was aged 42 when this happened. Elsie and James lived in 1933 at at Cliveden Flats, Roslyn Street in the Sydney suburb of Darlinghurst.30 Jim and Elsie had a photograph taken together c1945.

Elsie and James lived in 1949 at at Kanimbla Hall in Tusculum St. in the Sydney suburb of Potts Point.31 Elsie Florence Darby was a housewife in 1949.31

In later years, her daughter Margery never talked about her father, and never expressed affection for her mother who she wasn't close to.33