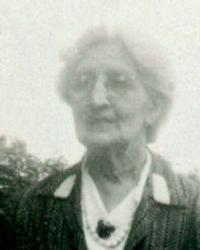 Edythe Mary Darby was also known as Edie.1 Edythe was born on Sunday, 23 January 1876 at Chorlton-on-Medlock, Manchester.2,3,4,5 She was the daughter of George Leonard Darby and Martha Alice Miller.

At the age of 9 Edythe emigrated from London on 25 December 1885 on the R.M.S. 'John Elder' with her mother and two sisters.They were on their way to join their father who was already in the colony. Edythe was about 10 years old.7

In December 1892 the Darby family had a grand piano at home, as it was lent for the cause of a fundraiser to build an institute and hall for the 700 or so residents.8 On 5 December 1892 there was a visit by legislators (including an M.P.) to the Darby property at Mylor, South Australia where someone noted that George and his family had the best house in the district. There was perhaps a suggestion that this was inappropriate give George's position in the Land Office. Later that night, George and his wife and daughters contributed items to the programme of the concert in the evening.9

George The town was described on 16 December 1892:
...Mylor is emerging from the embryo stage of exist ence. Most of the blocks have been sold at prices satisfactory to the Government. At present nothing can be seen except a general store, a carpenter's shop, and the frame of the local Church of England building. The rest is all a partially-cleared area backed and planted by gumtrees and scrub near the old stock road to Scott's Creek.10
A suggestion that the Darbys had the best house in the district was refuted by a T. Murphy (and in a different newspaper, 'Thomas H. Winkworth') who said that Mr. Hughes had a much finer house and that the Darby House was only 2 stone rooms, like several other houses.11,12

On 5 September 1896 Edythe was an accompanist at a fundraising concert for the Mylor Cricket Club.13

The Darby's sufferred another unsettling incident involving a horse carriage on 4 May 1902:
"SERIOUS VEHICLE ACCIDENT. Mr. G.L. Darby (chief clerk of the Woods and Forests Department), whilst driving to his home from Aldgate station on Monday evening with his daughters, met with a serious accident. The horse stopped suddenly, and in doing so broke a portion of the harness. The animal then bolted round a curve at the foot of a steep hill, throwing out all the occupants of the vehicle. Mr. Darby's ankle was broken, and he was removed to the Adelaide Hospital. His daughters received a severe shaking and abrasions."16,17


She married Sydney Larter Brown, son of Ellen Hall, at Manthorpe Memorial Congregational Church on Monday, 21 July 1902 at the Adelaide suburb of Unley. She was 26 and her husband Sydney was 31.18 Edythe, aged 29 and Sydney Larter Brown, aged 34 became the parents of Lorna Gertrude Brown on Thursday, 3 August 1905 at the Adelaide suburb of Hyde Park.19 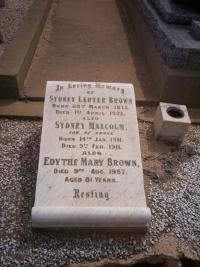 Headstone for Edyth Darby and her family 2005


Her mother died 22 December 1921 at the age of 71. Edythe was aged 45 when this happened. She and Sydney Larter Brown put a memorial piece in the paper to her mother, dead one year: ' DARBY. — A tribute of love to the memory of our ever dear mother who passed away on the 22nd December, 1921. . 'Oh, for the sound ot a voice that is stilled.' —Inserted by her loving son and daughter, Syd and Edie.' on 22 December 1922.1

Her father died 3 July 1926 at the approximate age of 76. Edythe was aged 50 when this happened. She was ill with eye disorders; she was nearly blind before death in 1950.