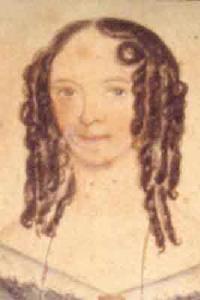 Mary Leonard c.1844
(For a brief history and context on the Darby family - which this person is an extended member of - see this page)

Mary was born circa 1816 at Rugeley, Staffordshire.4,5 Rugeley in the early 1800's was a small market town in the Hundred of Cuttlestone East. The town "has a remarkably neat, cleanly apperance; the houses are well built". The main item manufactured here were hats and sheet iron.The population was 2,677 in 1821.

She was recorded as living with her parents, 3 young children, and her younger siblings Emma, Martha and Ruth in the 1841 census at 1 Boundary Street, Hulme, Manchester. She was recorded as being approximately 20 years old (rounded down to the nearest 5 years).8

A small water-colour portrait was painted of Mary in 1844, probably a keep-sake for her family just before her immigration to Australia.

A visiting English artist drew a landscape of Morphett Vale 1845.


She married John D. Darby, by trade a bricklayer, but in the colonies a farmer, son of George Darby and Elizabeth Aylott, in a Congregationalist ceremony (the schoolroom may have been used as a temporary Union Chapel whilst it was being built) at the schoolroom on Thursday, 23 November 1848 at Morphett Vale, South Australia. John was aged approximately 30 and Mary was aged approximately 32 years old... A week later in the same place, John's brother Thomas married Jessie Nicholson.12,2,13

A year after the Independents met at Morphett Vale, the congregationalists laid the foundation stone for the Union Chapel on Thursday, 30 August 1849. It was completed in February of the following year for harvest thanksgiving, for a total cost of less than £200. It was intended that this would serve the needs for all the local Presbyterians. Reverend Edward Knight Baker was the initial minister, but had to resign his position four years later due to poor health.14,15

Mary and John D. Darby became the parents of George Leonard Darby circa 1850 at Morphett Vale, South Australia. George was perhaps named after his father's father. It also seems like his birth was not registered.16

The Darby house was a three-room wooden cottage with a garden on land (Section 10) that was owned by Reverend Baker.19

Her husband John died 26 January 1853 at the approximate age of 34, leaving her a widow. She was 3 months pregnant.20 Mary was the executrix of her husband John D. Darby's will on 26 January 1853. To his brother Thomas he left all of his real estate and personal effects, after payment of his debts and funeral expenses. He also stated that his "beloved wife" Mary was to enjoy the "use and benefits" of the property held jointly with his brother Thomas, namely half of Sections 628 and 801, as well as half of the allotments in Albert Town [Alberton] and Carrington Street, Adelaide. This share was to then pass to their children. He also wished Mary to have access to the reaping and winnowing machines along with "all the corn, hay, five horses with harness cart", as well as the leases of sections of 9, 10 and 90 owned by Reverend Edward Baker. John was to die later the same day..21

The will of her husband John D. Darby, in which Mary Leonard was named sole executrix was probated on 4 April 1853.21 Mary took in horses to graze on the property; her and a Mr. R. E. Tapley were the contact people. This probably referred to Richard Edward Tapley, a member of the extended family.22

Mary and John D. Darby became the parents of Mary Elizabeth Darby on Saturday, 23 July 1853 at Adelaide. Her father had died before she was born.23,24

In 1854 Mary was assessed for rates of £15 for holding a cottage.25 She witnessed her daughter Mary Elizabeth Darby's death on 23 June 1855 at Morphett Vale, South Australia. Mary was a month short of her second birthday.26

By 1856, Edward and Ruth had sold the majority of their land (Section 20) retaining a fifth, 40 acres. Part of Section 10 was leased to her niece, the widow Mary Darby (on the south-west corner of what is now Doctors and Panalatinga Roads).27,28

Mary died on 7 June 1861 at Hatherlow, Stockport, Cheshire, of pulmonary phthisis.. She was recorded as being aged 44.33