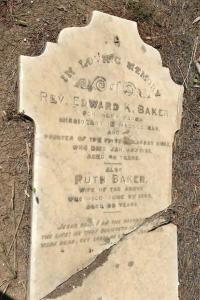 Headson of Edward and Ruth
Source: Find a Grave Memorial 194312946
NOTE: The information on this page is my research to date and is subject to change as I become better informed. I very much welcome any corrections or additional info you might have - my email address is at the bottom of this page. Whilst historical facts are not copyright, my writing about these facts are. If you wish to use any text from this site on Ancestry or on any other website, please ask me first - Tim Hill.
+ + + + + + + + + +

After competing his apprenticeship in 1827 he moved to Bath to become a Congregationalist preacher.3 On 19 November 1827 he was accepted on a limited-term contract to become a printer for the London Missionary Society.6

At the age of 23 Edward emigrated from England on 2 May 1828 on the "Seppings."7 Edward arrived at Madagascar.8

He was a missionary printer.9 Edward left Madagascar on 24 June 1832 and returned to England with the intention of getting married. This arrangement had been agreed to four years earlier. He arrived back in England the day after Christmas Day.10

He married Ruth Wayte, daughter of Thomas Wayte and Mary (?), on Tuesday, 9 April 1833 (although one source has it being the day after) at Ashby-de-la Zouch, Leicestershire. The daughter of a bookseller and printer..11,12,1

Apparently, Edward was deaf by the time he was 30. It isn't known to what extent, or how how long it had been this way.13

At the age of 29 Edward and his wife Ruth emigrated from Gravesend, Kent, on 28 February 1834 on the "Henry Wellesley."14 On the voyage, Edward had worked on his Malagasy to English dictionary, only to have it rejected by a colleague who thought it "rather a work of imagination rather than solid judgement" and accused him of hallucinations that would result in mental illness. Edward eventually published his work in 1845.15

Edward and his wife Ruth arrived at Madagascar on 1 July 1834.16

Almost immediately after his arrival they adopted the son of a Creole trader after the death of his father (the father had rendered many services to the missionaries).17 Reverend Edward Knight Baker and Ruth Wayte moved to Mauritius in September 1836. It is believed they were fleeing the persecution of Christians on Madagascar.18,19 Reverend Edward Knight Baker and Ruth Wayte arrived circa 1845 at Port Adelaide, South Australia.20

[PF1] and Ruth attempted to sell a "small flock of clean sheep, with a run" in Morphett Vale, South Australia, through an advertisment in the newspaper on 28 September 1847.

On 6 November 1848, Edward was recognised as an officiating minister for marriages.21

Jessie Nicholson and Thomas Darby were married by Reverend Edward Knight Baker on Thursday, 23 November 1848 at Morphett Vale, South Australia. A week earlier at the same place, Thomas' brother John had married Mary Leonard. No parents of the bride and groom attended the ceremony.25,26

A year after the Independents met at Morphett Vale, the congregationalists laid the foundation stone for the Union Chapel on Thursday, 30 August 1849. It was completed in February of the following year for harvest thanksgiving, for a total cost of less than £200. It was intended that this would serve the needs for all the local Presbyterians. Reverend Edward Knight Baker was the initial minister, but had to resign his position four years later due to poor health.27,28

On 30 August 1849 the foundation stone was laid of the Morphett Vale Union Chapel, and Edward gave a speech on "the principle of Christian freedom from ecclesiastical bondage and State-connexion on which this chapel was proposed to be built".29

By late 1849 Edward was a minister in Morphett Vale, South Australia, ministering once a day to his congregation. Membership of the congregation grew quickly.30

On 4 February 1850 he submitted an article to the newspaper that he thought "belongs ... in its character to the whole religious public". The article was very critical of "water-baptism", especially separatist Baptists. Edward sought to educate us to "preserve sound doctrine — i.e., healthy teaching" and his lengthy article strongly argues that practices of the Baptists are erroneous. Interestingly, he did not use the title 'Reverend' in the letter.
His letter was responded to by an anonymous baptist, also at considerable length.31,32

Thomas Darby and Reverend Edward Knight Baker both signed a passionate letter, published in a newspaper 8 March 1851, against the state financial support of religion - what at first glance might seem an unusual position for men who were both deeply religious. However, the Congregationalists lead the fight in South Australia against state aid. They were motivated by not wanting to see the influence of the Church of England grow, but also the Congregationalist ethos of a rejection of organisational hierarchy.33,34,35 He chaired the Annual Meeting of the regional Congregational Union until 1853.30

On 21 January 1853 he was granted the right to perform marriages in Adelaide.36 Reverend Edward Knight Baker and Ruth Wayte attested to the validity of John D. Darby's will on 26 January 1853. To his brother Thomas he left all of his real estate and personal effects, after payment of his debts and funeral expenses. He also stated that his "beloved wife" Mary was to enjoy the "use and benefits" of the property held jointly with his brother Thomas, namely half of Sections 628 and 801, as well as half of the allotments in Albert Town [Alberton] and Carrington Street, Adelaide. This share was to then pass to their children. He also wished Mary to have access to the reaping and winnowing machines along with "all the corn, hay, five horses with harness cart", as well as the leases of sections of 9, 10 and 90 owned by Reverend Edward Baker. John was to die later the same day..37

On 22 July 1854 a letter he wrote was published in the Adelaide Observer where he defended the pribnciple of voluntary support of christian ministers. He said, in part:
"The free appropriation of 'private means of their own' by ministers, in preference to becoming Government functionaries, is only a further instance of the beneficial operation of spontaneous religious effort."40

By 1856, Edward and Ruth had sold the majority of their land (Section 20) retaining a fifth, 40 acres. Part of Section 10 was leased to her niece, the widow Mary Darby (on the south-west corner of what is now Doctors and Panalatinga Roads).38,41 He relinguised his authority to solemnise marriages April 1857 after a severe fall from a horse, but remained in good health for almost another 30 years.42,30

On 10 April 1859 he delivered "an impressive sermon" at a special service to celebrate the fourth anniversary of John Knox's church in Morphett Vale, South Australia.46

Edward, as the father of the bride, along with Ruth may have attended the wedding of Harriet and Reverend Charles Manthorpe, a English Congregational minister, in a Congregational ceremony performed by Reverend Thomas Quinton Stow at her father's house on Thursday, 20 October 1859 at Morphett Vale, South Australia.. Others who may have attended include Sarah Love as mother of the groom and James Symonds Manthorpe as father of the groom. Charles and Harriet went on to have as many as 13 children together.47,1

On 18 November 1864 he wrote a long letter to the newspaper in support of emigration from the island of Bourbon to northern Australia, giving many reasons why he felt this would be a success based on his experience in Mauritius. The letter was reprinted two days later.48

Edward and Ruth seem to have taken in a number of destitute children.50

Edward, as the father of the bride, along with Ruth may have attended the wedding of Ellen and Charles Mosse Sprigg, a farmer marrying for the second time, in a Congregational ceremony conducted by her sister's husband Reverend Charles Manthorpe at Glenelg Congregational Church on Wednesday, 2 September 1874 at the Adelaide suburb of Glenelg.. Others who may have attended include . Charles and Ellen went on to have just one known child together.51,52 Edward and Ruth lived at Morphett Vale, South Australia. They were apparently in this 8 room stone house from their arrival in 1845 until their death 40 years later.53

Edward was memorialised in a short obituary on 27 January 1885:
"The Late Rev. E. Baker.— A correspondent has sent us the following interesting particulars relating to the life of the above named gentleman, the notice of whose death was published a few days ago :— ' The late Rev. Edward Baker was born on January 5, 1805. He was for several years a missionary in Madagascar, where he printed the first Bible in the Malagash language. When the persecution of the Christians arose he left the island and retired to Mauritius, where he resided for some years, and became English editor of a French and English journal called the Sentinelle. He exerted him self in Christian work for the good of the English and American sailors frequenting the port. He obtained from Government the use of an old ship, which he fitted up for the use of holding religious services every Sunday for their benefit. He was frequently engaged by the English Government in translating the negotiations between the two Governments of England and Madagascar. On his arrival in the colony, about forty years ago, the Rev. E. Baker took up his abode in Morphett Vale, and soon became associated with the Revs. T. Q. Stow, J. B. Austin and R. W. Newland (of Encounter Bay), and Mr. J. Stephens (of the Register and Observer), all of whom have preceded him to their final rest. After his settlement here he undertook for a short time the pastorate of a small Church in Morphett Vale, where he held morning services, and in the afternoon at Happy Valley. The deceased gentleman was the author of a Malagasy dictionary and grammar, and translated for the Bishop of Mauritius the English Prayer-book into the Malagasy language."4