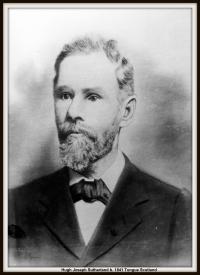 Hugh Joseph Sutherland
Source: D. K Nicholson (Ancestry 'dknicholson')
Photograph by Picasa
NOTE: The information on this page is my research to date and is subject to change as I become better informed. I very much welcome any corrections or additional info you might have - my email address is at the bottom of this page. Whilst historical facts are not copyright, my writing about these facts are. If you wish to use any text from this site on Ancestry or on any other website, please ask me first - Tim Hill.
+ + + + + + + + + +

The Nicholson and Sutherland families both came from the Couty of Sutherland in Scotland's remote north - this may be one of the reasons why these families bonded together throguh the marriage of Hugh and Margaret.

Hugh was contracted (along with a Samuel Pepper) to build the schoolroom at Parkes: on 27 February 1875:
"I also had a look at the public school building ; as there is little more done yet than the foundation and excavations, I can say but little more at present than it will be a fair-sized building, with a four roomed cottage for teacher's residence, and a class-room 13 feet by 15 feet, the main building being 48 feet by 21 feet; and from the well-known energy of the contractors, Messrs. Hugh Sutherland and Samuel Pepper, both of this town, that the building will be finished within the specified time. And I assure you it is much needed."
He completed further work on it in May 1876.10,11 He was ill with a serious illness that delayed the construction of the schoolhouse; 'there is scarcely a family that has not been attacked by the measles'.12 Hugh was the undertaker at the funeral of James John Bourke on 19 May 1876 at Parkes, New South Wales. No Minister attended the burial..13

Hugh had his blacksmithing business and house destroyed: on 9 November 1877:
"On Friday night, about 9 o'clock, our little town was aroused by the fire-bell ; Mr Hugh Sutherland's wheel- wright and blacksmith establishment and the dwelling were burnt to the ground, and the fire completelv ex- tinguished by 10 o'clock. It appears that one of the children, while going to bed accidentally set fire to the bed curtains, and as only the children were in the house at the time, the fire took so strong a hold as to baffle every endeavour to save the premises. A portion of the stock-in-trade was saved and a little clothing and furniture. Mr. Sutherland's premises were not insured. The back premises of the Royal were within 10 feet of Mr Sutherland's, and it was by the extraordinary exertions of the people that one side of the street was not consumed The cellar of the Royal being full of water was quickly opened, and a line of persons being formed, buckets of water were continually passing along without interruption and unnecessary confusion The water in this cellar was sufficient to extinguish the flames and this is the second time that in all probability the water from the Royal Hotel cellar has saved the town from destruction. The business people close at hand were exceedingly alarmed, for it seemed impossible at first that the fire could be stopped."14
On 19 October 1878 he advertised to let out tinsmithing tools valued at £20 and a shop.15 Hugh had his tender to build a post and telegraph office accepted 30 October 1878.16 He was president of the Parkes hospital. His wife's sister Susannah and her husband Michael were appointed as matron and wardsman respectively in May 1879.17 He and Margaret Nicholson moved to Cobar, New South Wales, circa 1880.18 Hugh provided information on the death of his wife Margaret Nicholson, on 10 August 1883, at Cobar, New South Wales, at age 42. The child, Hugh, survived..19

His wife Margaret died 10 August 1883, leaving him a widower at age 42.20 With eight children, three under the age of 10 and a young baby, Hugh must have been hard pressed, at least for a while. On July 1884 his tender to construct a post and telegraph office at Cobar, New South Wales, was accepted.21 In October 1888 he lodged an application for a 20 acre silver mining lease at Peak Hill, New South Wales.22

Hugh, as the father of the bride, may have attended the wedding of Alexandra and Henry Cyril Rogers, a wheelwright, in a Wesleyan ceremony at the residence of Hugh Sutherland on Thursday, 16 March 1893 at Cornish Town, Cobar, New South Wales.. Others who may have attended include . Alexandra and Henry went on to have five known children together.24