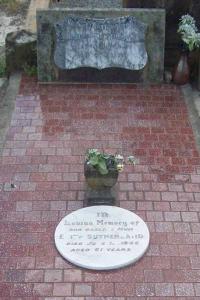 The headstone of Joseph James Sutherland and Edith Ellen McMillan
(Source: Greg Bell)
NOTE: The information on this page is my research to date and is subject to change as I become better informed. I very much welcome any corrections or additional info you might have - my email address is at the bottom of this page. Whilst historical facts are not copyright, my writing about these facts are. If you wish to use any text from this site on Ancestry or on any other website, please ask me first - Tim Hill.
+ + + + + + + + + +

Joseph was born circa 1878 at Parkes, New South Wales.1,2,3 He was the son of Hugh Joseph Sutherland and Margaret Nicholson. He presumably moved with his parents to Cobar, New South Wales, circa 1880.4

He may have attended the wedding of his sister in the marriage of Henry Cyril Rogers and Alexandra Sutherland in a Wesleyan ceremony at the residence of Hugh Sutherland on Thursday, 16 March 1893 at Cornish Town, Cobar, New South Wales. Alexandra and Henry went on to have five known children together.6

He was involved in an accident at work on 1 May 1926:
YESTERDAY'S CASUALTIES
Joseph Sutherland, aged 48 years, a wharf labourer, living in Bishopgate street, Wickham, was working in the hold of the steamer Port Auckland, at Lee Wharf yesterday, when he was struck by a bale of paper that had fallen 20 feet. He was admitted to the Newcastle Hospital, suffering from a fractured pelvis and shock. Last night his condition was critical.10

In his obituary it stated:
"The late Mlr. Sutlherland, who was one of the best known and most popular figures in the trades union movement in the district, was born at Parkes 47 1/2 years ago. He was a son of the late Mr. Hugh Sutherland, a pioneer of the Parkes, Forbes, and Grenfell districts. Moving to Cobar at an early age, he lived there for many years, coming to Newcastle in 1919, and following here his occupation on the waterfront. Always an active unionist, he was one of the pioneer members of the Amalgamated Miners' Association in the Cobar district, and for a number of years was secretary to the Eight-hour movement in that centre, where he was also known as a fine athlete and footballer."8