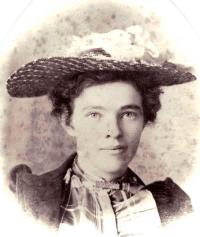 Alexandra Sutherland was also known as Alexandria.1 NOTE: The information on this page is my research to date and is subject to change as I become better informed. I very much welcome any corrections or additional info you might have - my email address is at the bottom of this page. Whilst historical facts are not copyright, my writing about these facts are. If you wish to use any text from this site on Ancestry or on any other website, please ask me first - Tim Hill.
+ + + + + + + + + +

Alexandra was born on Friday, 29 October 1869 at Forbes, New South Wales.2,3 She was the daughter of Hugh Joseph Sutherland and Margaret Nicholson. However, despite her given name she was known to the family as Allie.4 She presumably moved with her parents to Cobar, New South Wales, circa 1880.5

She married Henry Cyril Rogers, a wheelwright, son of George Rogers and Margaret (?), in a Wesleyan ceremony at the residence of Hugh Sutherland on Thursday, 16 March 1893 at Cornish Town, Cobar, New South Wales.. Others who may have attended the wedding include Hugh Joseph Sutherland as father of the bride. Brothers and sisters who may have attended include Margaret Josephine Sutherland, Mary Bridget Sutherland, Hughena Grace Sutherland, Hector Joseph Sutherland, Barbara Ann Sutherland, Joseph James Sutherland and Hugh Henry Sutherland. Alexandra and Henry went on to have five known children together.7 Alexandra lived in 1903 at Cobar, New South Wales.8 At the age of nine, there is a family story that Bonnie was sick but wanted to go out horse-riding; her mother Allie said 'no' and her father said 'yes'. So off Alexandra went and became very sick.9 Following the death of his daughter Bonnie, there is a family story that Harry had a break-down and literally walked away from the farm in about 1909, leaving his wife and children.10,9 There is also a family story that the drought weighed so heavily on Henry that he began drinking a bottle of whiskey a day whilst droving on horseback. Heis said to have attacked his sons with a stockwhip; evenutually Alexandra left him and moved to Sydney.11 She moved to Sydney circa 1920.10 She was reputedly he first mistress of at Sydney Girls High School, Sydney, although no evidence has been found to support this.10,12 She retired from the Infants Public School at Clovelly, where she was an assistant teacher on 30 September 1926.13 Alexandra lived in March 1927 at at Hall Street in the Sydney suburb of Bondi.14,15 Alexandra's occupation was given as 'home duties' in 1930.16 Alexandra lived in 1930 at at 66 Bream Street in the Sydney suburb of Coogee.16