Donald was born in north-western Scotland, and became a carpenter, a trade he probably learned from his father.

At the age of 26 he emigrated to New South Wales with his sister Fanny and her family. In NSW he was indentured for a while, marrying Margaret Brown, a Scottish low-lander in 1841, two years after his arrival.

They lived for some time in Balmain where her family was based, then moved to the Yass district for ten years or so, then on to Forbes and Parkes. Along the way, he and Margaret had 11 children, eight of whom survived to adulthood. Most of them married and also lived in regional New South Wales with their growing families.

Margaret died when he was sixty two, and he continued to work as a carpenter in Parkes. However, at some point he moved further west - perhaps with one or more of his children's families - eventually dying at the age of 87 at the tiny outback town of Byrock. 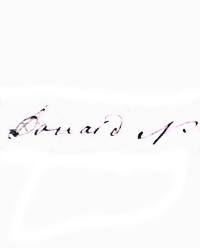 Donald's signature from his marriage certificate.
NOTE: The information on this page is my research to date and is subject to change as I become better informed. I very much welcome any corrections or additional info you might have - my email address is at the bottom of this page. Whilst historical facts are not copyright, my writing about these facts are. If you wish to use any text from this site on Ancestry or on any other website, please ask me first - Tim Hill.
+ + + + + + + + + +

Donald was born on Sunday, 12 January 1812 at the Parish of Assynt, Sutherland, Scotland.2,3 He was the son of Donald Nicholson and Mary Margaret MacDougall.1 He was baptised on Friday, 31 January 1812 at the Parish of Assynt, Sutherland.4 The parish of Assynt is on the remote north-western coast of Scotland. A few years before Donald's birth, the local Minister described it as "..consisting of lofty mountains, high hills, stupendous rocks, threatening precipices and numerous objects of the like kind." The weather is cold and bleak, and "the rain continues not only for hours, but often for days; nay for weeks..."5

In the early nineteenth century most of the county's 3,000 inhabitants lived on the coast, sustaining themselves with fishing and sheep farming. The main village in the parish was Loch Inver, with "a small harbour with a pier" as well as "several good houses and shops, and near it is a manufactory for preserving butcher's meat, fish, and vegetables, fresh, for the purposes of being carried out to sea". There was also a post-office and a preaching station by 1851. At this time, Loch Inver had a population of 756.

Nothing is known of Donald's early life except that he probably learnt his carpentry trade at the side of his father, a ship's carpenter & boat builder.

At the age of 26 Donald Nicholson emigrated from Lochinver, the parish of Assynt, Sutherland, Scotland, on 21 October 1838 on the James Moran a 600 ton bark with his older sister Fanny, her husband Thomas and their children. The James Moran, largely carried those subject to the Highland clearances, and came via Rev. John Dunmore Lang's bounty scheme..2 After a voyage of 113 days (almost four months) Donald arrived at Port Jackson, New South Wales, on 11 February 1839. The vessel called at the Cape of Good Hope from late December to the 2nd of January 1839. Whilst there, some of the passengers wrote a letter to the Commissioner of Emigration in Scotland, complimenting the food, the Surgeon and the Master, and expressing a hope that their comments would relieve "a dread of the hardships they may be made to endure on the passage". At the Cape they picked up 20 survivors from the wreck of the Dunlop and conveyed them to Port Jackson. Unfortunately, his youngest nephew Malcolm died on the voyage.2

Donald (and his sister's husband Thomas) were brought out by Mr. H. Scope of Liverpool and were to be paid 2 pounds and 2 shillings a week, without board. There was an undertaker named Henry Scope in Liverpool; were Donald and Thomas employed to make coffins for him? Henry Scope later described himself as a builder but was insolvent a few short years later in March 1842.7,8 Nothing certain is known of his first few years in the colony.

Donald lived in March 1841 at Parramatta, New South Wales. His wife-to-be Margaret also lived in Parramatta before they were married. She had arrived from Liverpool on the Heber a few months after Donald had arrived.9

He married Margaret Brown, daughter of John Brown and Margaret Miller, in a Presbyterian ceremony at Free Presbyterian Church in Pitt Street on Friday, 19 March 1841 at Sydney. He was 29 and his wife Margaret was 22. After their marriage Donald and Margaret lived in Parramatta at least until the start of the new year.. Witnesses to the wedding were Thomas MacKenzie.9 Donald Nicholson was a witness at the wedding of John Chalmers and Jessie Brown at St. Andrew's Scots Presbyterian Church on Monday, 7 June 1841 at Sydney.10 Donald, aged 29 and Margaret Brown, aged 23 became the parents of Malcom Nicholson on Thursday, 30 December 1841 at Parramatta, NSW.11 Donald's child Malcom received his baptism at St. John's on Sunday, 2 January 1842 at Parramatta, New South Wales. Presbyterian. This seems to be the first baptism of the year in the church.12 Donald Nicholson was a carpenter in January 1842 at Parramatta, NSW, and was to remain at this trade (sometimes calling himself a joiner or house carpenter) for all of his working life.13 Donald, aged 31 and Margaret Brown, aged 24 became the parents of James Brown Nicholson on Friday, 5 May 1843 at Sydney.14

Within two years of their marriage, Donald and Margaret's growing family had moved to Balmain. Also in Balmain were Margaret's family and their growing families.15 Donald and Margaret lived in 1844 at at Waterview Bay in the Sydney suburb of Balmain. Waterview Bay (now called Mort Bay) is an area of Balmain where a few boat builders had established small businesses along the waterfront. There is a Nicholson Street, leading down to the edge of this bay in East Balmain that has been there since the 1880's at least.15 Donald's child Donald received his baptism on Wednesday, 5 August 1846 at Sydney.16

Another two years found them in the Yass district at Archibald MacCallum's "Good-Hope" homestead. They became close to this family in some way, naming their daughter Susannah after the MacCallums recently died teenage daughter (and later Susannah was to also name her children after this family too).17 Donald's child John received his baptism at Bungonia on Tuesday, 30 May 1848 at Goulburn, New South Wales. i.17

Donald, as the father of the bride, along with Margaret attended Margaret Nicholson and Hugh Joseph Sutherland's wedding at the house of Donald Nicholson on Tuesday, 31 October 1865 at Forbes, New South Wales.. Hugh was a wheelwright from Scotland.28 The Nicholson and Sutherland families both came from the Couty of Sutherland in Scotland's remote north - this may be one of the reasons why these families bonded together throguh the marriage of Hugh and Margaret.

On 4 September 1866 his older brother James died in Geelong at the approximate age of 70.

On 20 December 1869 his older sister Margaret died in in Scotland at the approximate age of 64.

Unwed daughter Susannah gave birth to a son, Fredrick Hilton Nicholson. She was 19.29 Donald Nicholson and Margaret Brown moved with their younger children to Bushman's Lead, New South Wales, in 1871. They made the move just after gold had been discovered, when the town 'consisted of a butcher's shop, a bakery and a few houses which the hardy pioneers had constructed from the timber around them.30,31' By the middle of 1871, Donald and Margaret's son Donald had moved to Sydney, and had there married Annie Smyth in a Church of England ceremony. Two months later another son, James, married Lydia Hosnell in Bathurst in a Roman Catholic ceremony.32,33 Donald and Margaret lived in September 1872 at Bushman's Lead, New South Wales.30 Donald, as the father of the bride, along with Margaret attended Mary Jane Nicholson and Henry Olliver's wedding at her father's house on Sunday, 8 September 1872 at Bushman's Lead, New South Wales.30

His wife Margaret died 22 May 1874 at the age of 56, leaving him a widower at age 62. Margaret had been involved in a carriage accident some 3 weeks earlier, but had deteriorated rapidly in the days before her death.34,35 Margaret's death would have been about the time that their daughter Susannah found out she was pregnant again - and still unmarried. Donald, as the father of the bride, attended Susannah Alletta Nicholson and Michael Bourke's wedding at her father's house on Saturday, 26 December 1874 at Parkes, New South Wales.. Michael was a miner.36 Donald hosted the wedding of his daughter Susannah on Boxing day, 1874. With the recent death of his wife, and the unwed Susannah's growing pregnancy, the later half of this year must have been difficult for Donald. The end of this long day saw the baby born and Susannah married to Michael Bourke, a miner.37,36 Donald Nicholson witnessed his grandson James John Bourke's burial on 19 May 1876 Goobang Creek cemetery at Parkes, New South Wales. No Minister attended the burial..38

The youngest of his daughters, Fanny, was married in Forbes in October 1876. Donald may well have attended the wedding.39 Donald, as the father of the bride, attended Frances Nicholson and John William Aplett's wedding on Saturday, 18 November 1876 at Forbes, New South Wales. The marriage took place at the home of Henry Clancy in Browne Street.40,41 At this time his occupation was given as a carpenter.42 Donald lived in 1878 at Parkes, New South Wales.42 Donald's daughter Margaret died in childbirth at Cobar in 1883 at the age of 38. Three months later his daughter Susannah's husband died of alcoholic poisoning at the age of 36.43,44

On 12 January 1884 his older sister Anne died in in Lochinver, Scotland at the approximate age of 89.

On 10 March 1884 his younger brother John died in Glasgow at the approximate age of 67.

It isn't clear what happened to Donald in the next 16 years, but it is likely that his advancing age lead him to greater dependency on his children, especially perhaps his youngest daughter Fanny.

On 1898 his older sister Fanny died in Balmain at the approximate age of 93.

Donald died on 3 November 1899 at Byrock, New South Wales, at age 87 of senile decay. His daughter Fanny stated that he had been deteriorating over the last three years of his life.45 His body was interred at Byrock Cemetery on 4 November 1899 at Byrock, New South Wales. However, there is some confusion about where he is buried. A record exists in Cobar Shire cemetery's register for a 'Donald Nichollson' in 1899, but his death certificate indicates he was buried at 'Byerock cemetery' which is about 120km distant. However, his name does not seem to recorded on the registers for Byrock cemetery..46,45,47