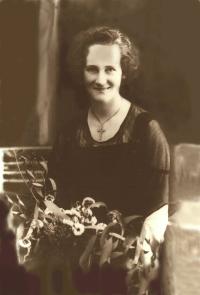 Mary Margaret Oaten
(source: stevebower1 - ancestry.com)
NOTE: The information on this page is my research to date and is subject to change as I become better informed. I very much welcome any corrections or additional info you might have - my email address is at the bottom of this page. Whilst historical facts are not copyright, my writing about these facts are. If you wish to use any text from this site on Ancestry or on any other website, please ask me first - Tim Hill.
+ + + + + + + + + +

Margaret was born on Thursday, 23 September 1897 at the Melbourne suburb of Clifton Hill.1,2 She was the daughter of Charles Henry Oaten and Catherine Carroll. She presumably lived with her parents at at 105 Spensley Street in the Melbourne suburb of Clifton Hill in December 1897. This house was a wooden house, marked as 103 in the rate book for this year but likley No. 105 (as was same house renumbered in the subsequent year).3,4 Her common name was Maggie.5,6

Margaret went to the at St. Vincent de Paul's Orphanage in the Melbourne suburb of South Melbourne on Wednesday, 9 October 1901 following the death of her mother.10

On Wednesday, 9 October 1901 three days after the death of her mother, Lydia went to live with the nuns in an Abbotsford convent (most likely Sisters of the Good Shepard) in about 1901. Maggie and Kate went to live with the St. Vincent de Paul's Orphanage in Emerald Hill. Their brothers went to a Catholic boys home in South Melbourne (probably St. Vincent de Paul's Boy Orphanage), whilst the youngest daughter Alice initially went to live with neighbours until she was four. She was then made a ward of the state at Royal Park and lost track of her family until she was seventeen. She became aware of her family when she was sent a cheque.11,12,13,14

On Saturday, 22 May 1909 Margaret was discharged from the orphanage to the care of her brother Albert.10

She may have attended the wedding of her brother in the marriage of Albert Edward Oaten and Violet Barbara Cheyne in a Congregational Church ceremony at at the manse 101 Gore Street on Wednesday, 24 November 1909 at the Melbourne suburb of Fitzroy. Violet needed the consent of her father to marry; both Violet and Albert had lost their mothers in their early teens. Violet and Albert went on to have four children together, three of whom lived to their adulthood.15,16

She married George Norwood, son of Thomas Norwood and Elizabeth Holligan, in 1918 at Victoria..17

One year after Albert's death his sister Margaret published a memorial in the paper:
OATEN.— In loving .memory of my dear brother, Albert, who passed away on the 2nd May, 1919; and Albert Robert, son of above, died 3rd May, 1917,
The sudden shock, the pain severe,
We little thought your death so near;
Only those who have lost are able to tell
The pain at the heart at not saying farewell.
A better brother never lived,
Or one more true and kind;
His equal in this weary world
Is very hard to find.
So dearly loved, so sadly missed.
— Inserted by his loving sister and brother-in-law, Maggie and George.5
Margaret and George lived in 1924 at at 108 Gipps Street in the Melbourne suburb of Collingwood.18 Margaret and George lived in 1934 at at 99 Henty Street in the Melbourne suburb of Preston. Margaret's aging father also lived with them.19

She may have attended the wedding of her niece in the marriage of Hubert Nicholson and Mavis Lily Oaten in a Church of England ceremony at All Saints on Saturday, 17 February 1934 at the Melbourne suburb of Kooyong. Mavis married with the consent of her mother. They went on to have some eight children together, only two of whom reached adulthood.20,21

Margaret Mary Oaten was recorded as engaged with home duties in 1936.22 Margaret and George lived in 1939 at Preston. Margaret's aging father also lived with them.23

She may have attended the wedding of her niece in the marriage of Harold John Neill and Violet Agnette Oaten at St. John's Church of England on Saturday, 20 January 1940 at the Melbourne suburb of Camberwell. Harold and Violet went on to have two children together.24 Margaret's occupation was given as 'home duties' in 1946.25