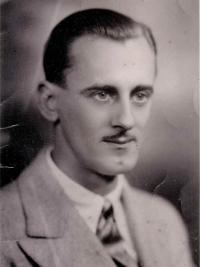 Hubert was born on Thursday, 16 December 1909 at Queenstown, Tasmania.1 He was the son of Charles Leigh Clare Nicholson and Louise Augusta Fookes. His long name was Hubert Evelyn Leigh Arncliffe Donald St.Aldwyn Nicholson. Hubert Nicholson was also known to the family as Boy or Nick (a shortening of his surname.) The Nicholson family posed for a photograph c1910.

His father died 1930. He was a mechanic in 1931.6 He lived with his mother and likely his younger brother Brandon in 1931 at at 51 Haines Street in the Melbourne suburb of Glenferrie.6 The following story relates to how Hubert 'Boy' Nicholson and Mavis 'Micky' Oaten met: Mavis and Hubert's sister Jeanne both worked at the Coles Department Store in Glenferrie Road. Jean invited Mavis home to their house in Coppin Grove, and it started there. Hubert's teenage brother Bon was also attracted to Mavis, but it was the older Hubert who won out.7 Hubert and Mavis Lily Oaten became the parents of Leigh Donald Nicholson in 1934 at Victoria.8

He married Mavis Lily Oaten, a shop assistant, daughter of Albert Edward Oaten and Violet Barbara Cheyne, on Saturday, 17 February 1934 at the Melbourne suburb of Kew. He was 24 and his wife Mavis was 20. Witnesses to the wedding were Violet Barbara Cheyne and Louise Augusta Fookes.9,10

Hubert Nicholson was a fitter in 1936.11 Hubert and Mavis lived in 1936 at at 97 Illawarra Road in the Melbourne suburb of Auburn. They were to stay there for about the next two years.12

After their marriage, Hubert and Mavis moved in with his mother at 2 Coppin Grove in the Melbourne suburb of Hawthorn.7 Hubert was a major with with the Royal Australian Signals Corps in the Second World War. He apparently was involved in the atomic tests at Maralinga in some capacity, as well other scientific projects, and described himself as a soldier and a teacher for the next decade. Mavis and Hubert had a number of other children between 1935 and 1941 but all of them except Barbara died young. There is some speculation that this is because they had congenital birth defects due to their parent's incompatible blood types that resulted in clotted blood (Margaret), being born with half a bowel and septisemia.7 He was a teacher perhaps of Electrical and Radio engineering in 1942 at Melbourne Tech, in Melbourne.13,7 Hubert and Mavis lived in 1942 at Hawthorn. They stayed there until they went overseas; on their return at the end of the decade they went back to Coppin Grove.13,14

Christmas for the extended family would take place at a different house each year, with each family bringing meals to contribute to the affair. There would be sing-a-longs of Chrstmas Caroles and a big traditional roast of ham and turkey.15 Hubert and Mavis lived circa 1948 at Great Bookham, Surrey. They remained there for three years in the late 1940's.7 He presumably lived with his spouse Mavis at The Lodge Sole Farm House Church Road, in Great Bookham, Surrey, in 1948.16 Hubert Nicholson and Mavis Lily Oaten departed from Melbourne on 5 January 1950 on the Strathnaver They were returning home from Hubert's posting to England Travelling with them were their children, Barbara and Graham. They reached Australia on 1st February 1950.17,18 Whilst in England, Hubert had been working for the Australian Army, and gave his address (perhaps a working address) as 85 Jermyn Street London.17 He and Mavis Lily Oaten arrived in Fremantle, Western Australia, on 1 February 1950 with their children Barbara and Graham.19 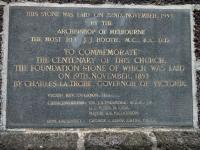 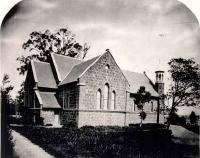 
His mother died 1959. Hubert was a church warden at at Christ Church in the Melbourne suburb of Hawthorn and member of the dioces. His service is commemorated with a plaque at the church.20

Hubert and Mavis lived in 1968 at at 20 Bluff street in the Melbourne suburb of Hawthorn East.

Hubert died on 9 March 1968 at at 20 Bluff Street in the Melbourne suburb of Hawthorn East at age 58 of coronary occlusion after months of arterial sclerosis.21 His body was cremated at Springvale Crematorium on 12 March 1968 at the Melbourne suburb of Springvale. His daughter Barbara, then living in Alice Springs, flew down for the funeral..21 His body was perhaps interred at Christ Church at Hawthorn.22