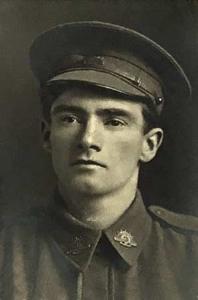 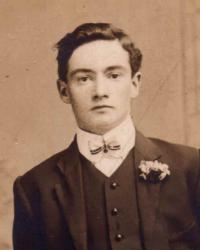 Charles was born on Wednesday, 19 November 1890 at the Melbourne suburb of Collingwood.1,2 He was the son of Charles Henry Oaten and Catherine Carroll.

In the early 1890's, the family moved a number of times, never staying more than a year or two; to 58 Easey Street Collingwood, then Henderson Street Northcote, then back to Easey Street but this time at number 134 (a small single storey, single-fronted terrace house). By 1896 they finally came to 44 Hilton Street in Clifton Hill - also a single storey, single-fronted terrace house - where their next two children were born.3,4,5,6,7,8 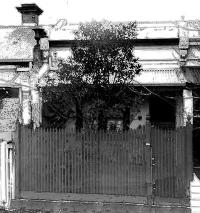 134 Easey Street, Collingwood
[Source: Google Maps]
He presumably lived with his parents at at 105 Spensley Street in the Melbourne suburb of Clifton Hill in December 1897. This house was a wooden house, marked as 103 in the rate book for this year but likley No. 105 (as was same house renumbered in the subsequent year).9,10

On Wednesday, 9 October 1901 three days after the death of her mother, Lydia went to live with the nuns in an Abbotsford convent (most likely Sisters of the Good Shepard) in about 1901. Maggie and Kate went to live with the St. Vincent de Paul's Orphanage in Emerald Hill. Their brothers went to a Catholic boys home in South Melbourne (probably St. Vincent de Paul's Boy Orphanage), whilst the youngest daughter Alice initially went to live with neighbours until she was four.15,16,17,18 At the age of 13 Charles Henry Oaten was indentured to Mr. Brazel of Yinnar on 15 November 1904.2

He may have attended the wedding of his brother in the marriage of Albert Edward Oaten and Violet Barbara Cheyne in a Congregational Church ceremony at at the manse 101 Gore Street on Wednesday, 24 November 1909 at the Melbourne suburb of Fitzroy. Violet needed the consent of her father to marry; both Violet and Albert had lost their mothers in their early teens. Violet and Albert went on to have four children together, three of whom lived to their adulthood.19,20 Charles lived in 1913 at at 117 Hotham Street in the Melbourne suburb of Collingwood.21 He was a boot clicker in 1913.21 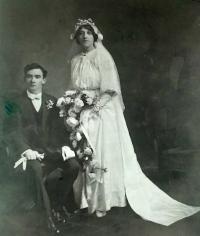 Charles Oaten and Maud Cabe
Source: M. Nascarella
Charles and Maud lived in 1914 at at 175 Canning Street in the Melbourne suburb of Carlton.22

His wife Maud died 1915, leaving him a widower. Charles lived in 1916 at at 17 Victoria Road in the Melbourne suburb of Northcote.24

Charles Henry Oaten began military service on Friday, 3 November 1916 with the 57th Battalion at the Melbourne suburb of Royal Park at age 25. . He had been rejected three times previously.25 He was described as Roman Catholic on his enlistment papers.26 He was described as 5 feet 6 inches tall, of ruddy complexion with brown eyes and dark hair.26

He embarked at Melbourne on Saturday, 16 December 1916.27 Charles was disemabrked at Plymouth on 18 February 1917.27 He spent less than 3 weeks with 15th Training Battalion at Fovant camp, in Fovant, Wiltshire, before he spent 6 days in hospital.27

Charles was put on a charge 'conduct to the prejudice of good order and military discipline' in that he created a disturbnace in camp after Lights Out.29

He became sick again on Tuesday, 6 August 1918 and was sent to 12th Casualty Clearing Station, and then spent the rest of the war in hospital. For the first time he is diagnosed with Gonorrhoea.27 Charles was transferred to 39th General Hospital, but this time his condition was 'not yet diagnosed'.28 Charles rejoined his unit again on Thursday, 28 November 1918, 2 weeks after the armistice.27

He married Ida Louisa Hughina Bruce, a hat trimmer, daughter of Sydney Thomas Bruce and Mary Louisa Gedge, in 1919 at the Melbourne suburb of Fitzroy. Ida was the daughter of Charles' father's second wife i.e. his step-sister, although she was 16 when their parents married...32,33 Charles Henry Oaten was awarded the 1914/1915 Star, the British War Medal and the Victory Medal on 9 February 1920.34

He may have attended the wedding of his niece in the marriage of Hubert Nicholson and Mavis Lily Oaten in a Church of England ceremony at All Saints on Saturday, 17 February 1934 at the Melbourne suburb of Kooyong. Mavis married with the consent of her mother. They went on to have some eight children together, only two of whom reached adulthood.42,43

He may have attended the wedding of his niece in the marriage of Harold John Neill and Violet Agnette Oaten at St. John's Church of England on Saturday, 20 January 1940 at the Melbourne suburb of Camberwell. Harold and Violet went on to have two children together.44