George Speller Wright was born in North Adelaide in 1845 and seems to have received a good education, enabling him to become a lawyer, and then a newspaper worker, then joining government service at the age of 18.

At the age of 21 he married Emma Olifent and together they had seven children over a ten year period.

He held a range of positions in government service culminating in joining the newly-established state bank as Inspector General 1896.

He retired after about 52 years in government service, enjoying a twelve year retirement until he died in 1935 at the age of 89. three years after the death of Emma. 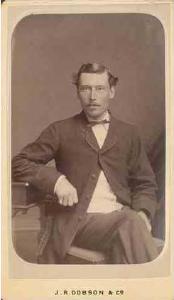 George Speller Wright c1875
(source: State Library of South Australia Portrait Collection
http://trove.nla.gov.au /version/15720586)
NOTE: The information on this page is my research to date and is subject to change as I become better informed. I very much welcome any corrections or additional info you might have - my email address is at the bottom of this page. Whilst historical facts are not copyright, my writing about these facts are. If you wish to use any text from this site on Ancestry or on any other website, please ask me first - Tim Hill.
+ + + + + + + + + +

George Speller Wright J.P. was born on 11 January 1845 at Abbots Place, in North Adelaide.2,3 He was the son of John Speller Wright and Martha Darby.

His father died 8 February 1846 at the approximate age of 34. George was aged 1 when this happened. He was a student at John Lorenzo Young’s Adelaide Educational Institution.4 George was employed at the offices of Hanson & Hicks (later known as Hicks, Daly, & Price) an auctioneer where he received legal training, and soon after he began with 'The Register' in 1860.2,4 George was employed by the Adelaide General Post Office as a clerk on 1 September 1863.2 He was employed by the Chief Secretary's Office as a clerk, after being selected from a number of applicants on 10 November 1864.5,4 George was promoted to 'Clerk of the third class' in the Crown lands and Immigration Office.6 George lived in 1867 at North Adelaide.7

George Speller Wright J.P. married Emma Elwin Olifent, daughter of James Smith Olifent and Eliza Oyer, at Stow Memorial Congreational Church on Wednesday, 22 May 1867 at Adelaide. They were 22 and 21 respectively.8 George Speller Wright J.P. was clerk in the Chief Secretary's Office in March 1868.9 George, aged 24 and Emma Elwin Olifent, aged 23 became the parents of their first child Arthur John Speller Wright on Monday, 24 May 1869 at Adelaide. Arthur was to be the first of six children over a 10 year period.10

George was promoted to Secretary of the Marine Board on Saturday, 11 July 1874. Previously he had been Chief Clerk and Accountant in the Treasury.11 On 4 January 1877 George was promoted to the Chief Clerkship, second class, in the Chief Secretary's Office. He was also attached to the Crown Lands Department, Chief Clerk in Treasury, Receiver of Revenue & Accounts.12,13,4 He became Chief Clerk in the Chief Secretary's Office 1878.4 George, as Secretary of the Marine Board, may have been able to help his cousin John Darby gain a posting as a 5th grade clerk in his office.14 He was a witness at the wedding of John Darby and Edith Watson at the residence of George Wright on Saturday, 12 October 1878 at the Adelaide suburb of Woodville.15 George was employed as Acting Secretary, Acting Government Statist and Superintendent of the 1881 Census.4 On 14 February 1881 Thomas Darby gave a report on the test-growing of two new types of wheat - Champlain and Defiance. The wheat was passed to him by his brother-in-law George Speller Wright J.P.16

He was promoted to be Secretary to the Honourable Commissioner of Crown Lands and Immigration, and Inspector General of Credit Lands on 10 March 1882.17,4 He had his name added 'to the commission of the peace' on 15 May 1882 at Adelaide.18 George "produced a notably significant chart of the colony's Hundreds containing amongst other things detailed information on railway locations, rainfall, farming and crop, pastoral and stock distribution."4 He was appointed Inspector-General of Credit Lands 1884.19 He had an interest in the Molesworth Ore Reduction Company on 17 November 1892.20

He was secretary to the Commissioner of Crown Lands on 31 October 1895.21 He was a founding member of the Central Pastoral Board and Central Land Board on 10 January 1896.22

George was nominated to a position in the state bank on 21 February 1896:
"The trustees of the newly established State Bank met at the Treasury to day. Numerous applications for the position of Inspector General under the State Advanees Act were considered, and eventually Mr. George Speller Wright, secretary to the Commissioner of Lands, was nominated tor the office. Mr. Wright has been inspector general of credit selections tor many years and has been secretary of the lands department since March, his first appointment in the South Australian Government service dates back to September, 1863. Mr. Wright's present salary is 600 pounds as secretary of the Lands Department and 100 pounds as Inspector-general of credit lands, and he asks for a salary 800 pounds per year for the new position."22,23
He he resigned his Land Board positions with government on 6 March 1896.24

He celebrated 50 years of service with the South Australian Government: on 30 August 1913.2 George was nominated on Saturday, 4 December 1915 to be one of the two councillors for the new municipality of Henly and Grange. A year later he nominated for mayor. Since there were no objections he was proclaimed to the position. A year after that, he ran for the position again and was elected with more than 85% of the vote.25,26,27 He bgan a 7 month long-term leave from his position at the State Bank, a the end of which he retired. on 4 May 1920.28,3 He was included in a photograph of senior South Australian Civil Servants.


He and Emma Elwin Olifent celebrated their diamond wedding anniversary on 22 May 1927.29 George and Emma lived on 26 May 1927 at Henly Beach.30

George died on 1 January 1935 at Howard Terrace, in Hazelwood Park, South Australia, at age 89.32 He was buried at West Terrace Cemetery, in Adelaide.4