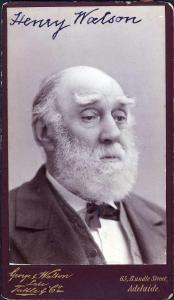 Henry Watson
Source: State Library of South Australia B 11174
NOTE: The information on this page is my research to date and is subject to change as I become better informed. I very much welcome any corrections or additional info you might have - my email address is at the bottom of this page. Whilst historical facts are not copyright, my writing about these facts are. If you wish to use any text from this site on Ancestry or on any other website, please ask me first - Tim Hill.
+ + + + + + + + + +

Henry Watson married Charlotte Eliza Float on Tuesday, 5 April 1836 at England. They were 33 and 23 respectively.3,2

At the age of 36 Henry and his wife Charlotte emigrated from Gravesend, Kent, on 31 October 1838 on the "Katherine Stewart Forbes."4 Henry and his wife Charlotte arrived at Glenelg, South Australia, on 21 March 1839. the family had brought with them a pre-fabricated house that they had bought in London. Remarkably, the house is still standing and is the oldest ston ehouse in South Australia.4

Henry Watson was a merchant in a business venture he started styled Hack, Watson, & Co.4

However, Henry had a serious financial setback:
Under Wakefield's colonization scheme, adopted in the foundation of the State, all the money required for setting the new colony on its feet was to be obtained for sales of land, and it does not seem to have been sufficiently noted (says Mr. Lloyd in a letter accompanying the gift) that in a new country the residents would require shelter for themselves and their goods, as well as certain public works, and money for the payment of public servants. The consequence of the absence of funds the young province got into a serious position, and in the poverty and misery of the cataclysm in Governor Gawlers time all the members of the Adelaide Chamber of Commerce, with two exceptions, had to declare themselves insolvent. Messrs. Hack, Watson, & Co. were among the unfortunate losers. They had taken stock and valued their property at £30,000. but they came out of the Court stripped of their all.had to make a fresh start, and never fully recovered their former positions.4
He was Chief Clerk of Customs in 1841.5

However, in early 1849 he was removed from his position in the customs service in what was seen as an unfair political move.5

On 21 March 1849, 10 years to the day after arriving in the colony, Henry took up his original occupation as a chemist and druggist.4 He was a chemist.6 Henry lived in September 1880 at North Adelaide.7