John Darby was born on the 13th of May 1854 the son of of an English farmer and a Scotswoman.

He married Edith Watson at the age of 24 and together they were to have nine children over sixteen years.

Not much is known about his private life; perhaps he was one of those men who is consumed by his working life.

He died four and half years after retiring at the age of 76. 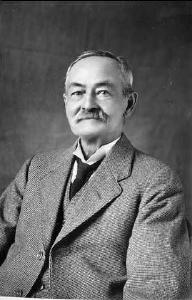 John was born on Saturday, 13 May 1854 at Morphett Vale, South Australia. Perhaps he was named after his uncle of the same name who died in the year before he as born. His father and John had come out together and began as farmers..1 He was the son of Thomas Darby and Jessie Nicholson.1 He was a student at at Morphett Vale, South Australia.2 John Darby entered government service as a cadet in customs office under J. W. Lewis as Collector of Customs on 11 September 1872.3,4,5 He became a junior clerk in the Office of Treasury on 20 October 1873.6,7 He appointed as clerk to the Superindent of Mercantile Marine on 1 July 1875.4

When the Darby family moved to Minlacowie, South Australia by travelled by bullock dray and on arrival cultivated the land, which was scrub, with a single furrow plow and one horse.8 John was selected as a 5th class clerk with the Marine Board. This was at a time when his cousin George Speller Wright was Secretary of the Marine Board.9

He married Edith Watson, daughter of Henry Watson and Charlotte Eliza Float, at the residence of George Wright on Saturday, 12 October 1878 at the Adelaide suburb of Woodville. He was 24 and his wife Edith was 25. Witnesses to the wedding were George Speller Wright J.P.10 John, aged 24 and Edith Watson, aged 25 became the parents of their first child Eustace Wilkie Darby on Wednesday, 5 March 1879 at Lefevre Peninsula, South Australia. They were to have a further eight children over the next sixteen years.11,2 John Darby advertised for let a four room furnished cottage on 11 April 1879 at Exeter, South Australia.12

In an effort to cut costs, John - who was at that time Chief Clerk and Paymaster - was advised his services were no longer required in late 1888. This must have been a concern for him and his growing family. However, he took advantage of a clause allowing him to stay on but take the salary of a lower ranked man - this continued down the line so that ultimately a number of junior officers were dismissed.16

John and Edith was seeming leaving their property and offering much of their goods for sale on 28 March 1889:
"TO-MORROW (Friday), March 29, at 2 o'clock. AT THE GRANGE. CATTLE, HORSES, FARMING IMPLEMENTS, PIGS, POULTRY. Theo. HACK is Instructed by John Darby, Esq., who is leaving the Grange, to sell without reserve, on the farm DAIRY COWS just calved and springing, Dry Cows, Young Stock, and Bull; Vast Trotting Mare, quiet for a lady to drive Young Horses, Berkshire Sow and young Pigs 120 choice Leghorn Fowls, 40 Ducks, Express Wagon, Harness, Saddle, and Bridle Wagonette. Spring-Dray. Mowing Machines 4 Hives Bees, Plough, Ladder. And lot of Sundries."17
John Darby was elected a member of the South Australian Bookkeepers Association on 16 November 1889.18 He was a member of the Beekeepers Association, and said that the number of his colonies had increased from 2 to 4 in July 1890 at the Adelaide suburb of Woodville.19

He was again promted from clerk, fourth class to clerk, third class, making up for his reduction of the previous year on 30 January 1891.20 He was again Acting Secretary of the Marine Board on 19 March 1891.21 He was appointed Secretary of the Marine Board. He was also appointed accountant. He was "a very painstaking officer" and "they might rely on his performing in a manner satisfactory to himself and the Board the duties entrusted to him" on 11 May 1894.3,22,23,24 John, aged 40 and Edith Watson, aged 40 became the parents of their second-last child Kenneth Watson Darby on Tuesday, 15 May 1894 at Woodville.25 John Darby was also appointed accountant of the Customs Department. on 25 May 1894.26

Tragedy struck the Darby family when John and Edith's son Kenny Darby, not quite two years of age, was shot dead by his seventeen year old brother Eustace on 23 February 1896. There was an inquest, and a verdict brought down of accidental death with no blame being attached to anyone.27,11

John was involved in an incident at Port Adelaide on 25 March 1904:
"STABBING AFFAIR AT PORT.
A CHIEF OFFICER WOUNDED.
A LASCAR ARRESTED.
On Friday afternoon Mr. James Cawsey, chief officer of the steamer Newton Hall, which arrived on the previous day from Japan, was stabbed on board the vessel by a Lascar seaman. The injured man, who bled freely from a punctured wound in the neck, was conveyed to the Port Adelaide casualty hospital, where he was attended to by Drs. Gething and Formby.
The Lascar had been giving trouble on board for some time, and as he desired to leave the vessel in Australia an extra watch had to be set over him. With a view to preventing his escape at Port Adelaide, Captain Hostler intended having him put under the care of the police, as he did not care to risk prosecution under the Immigration Restriction Act, through his escape from the vessel. Complaints made by the man concerning ill-treatment were enquired into by the shipping master (Mr. L. Smith), who secured from the captain a guarantee that the lascar would receive protection. Without provocation the man turned upon and stabbed the chief officer with a large clasp-knife. As soon as he had committed the act the Lascar ran ashore and entered the office of the secretary to the Marine Board. He handed that official the bloodstained knife, at the same time gesticulating in an excited way. Mr. Darby detained the man, who was subsequently given into the custody of the police. The accused's name'is Mousa Maronan. He is a native of Bombay. He will be brought before the Port Adelaide Police Court this morning. The wounded chief officer, although he lost a large quantity of blood - is progressing as well as can be expected."33

John gave evidence in court on 25 March 1904:
"the accused rushed into his office in a panting state with an open knife in his hand, which he placed on the blotting pad in front of him The knife had blood on it. The accused said something which witness could not understand. A crowd of colored men rushed in after him. Witness locked his office door and telephoned to the police. Subsequently he handed the blood stained knife to a constable, who also took the defendant into custody."34
35 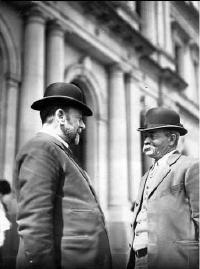 Arthur Searcy and John Darby (right) c.1910
(State Library of South Australia, image PRG 280/1/44/35)
He was honoured when the name 'Point Darby' was given to one of the headlands of Laura Bay in January 1910.36 John and Edith lived in June 1912 at at 'The Gums', Caversham in the Adelaide suburb of Woodville.37 There was a fire at the Darby's property that destroyed a haystack and a shed. It was John's belief that the fire was started by boys who had gone to the haystack to steal eggs.38 John, as the father of the bride, attended Kathleen Eva Darby and James Henry March's wedding on Thursday, 20 April 1916 at Caversham, South Australia. They were married at his home.39 Had some photographs taken of him 1918.40,41

John and Edith lived in December 1922 at at Russell Terrace in the Adelaide suburb of Woodville.42 John Darby was due to retire on on 30 June 1925.43

At the end of 1925 the Marine Board ceased to exist; he had been its secretary for about 32 years. He was commended for his services. on 31 December 1925:
"The retiring secretary (Mr. Darby ) is one of the best known and most highly respected personalties in Port Adelaide. During his association, extended over 53 years, with the Marine Department, he has collected a mass of useful information concerning the department, and there we few questions on marine matters that he cannot answer off hand. He was an encyclopaedia to the board, and only at its last meeting a knotty question arose which only the veteran secretary was able to solve."44,4

John was honoured by his friends and colleagues on 6 January 1926:
"... Mr. Darby knew his job thoroughly and was a most reliable authority to appeal to for information and guidance. ... I bid Mr. Darby adieu and may he live long, prosper, and enjoy a happy life in his new home. I have nothing but good to say of John Darby".45,46
John and Edith lived in July 1930 at at 10 Francis Street in the Adelaide suburb of Fullarton.47

John Arthur Searcy wrote on 8 July 1930:
"I would like you to say a word about the death of poor John Darby, late secretary of the Marine Board. He was a worthy successor of a number of remarkable secretaries, including G. S. Wright [George Speller Wright, his uncle], G. De Mole, and T. N. Stephens. He was a splendid officer and very efficient."50