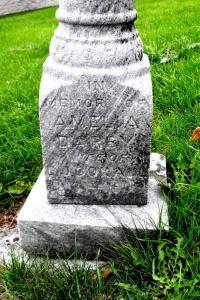 Amelia Darby - headstone
Source: AnneBenson74 at Ancestry.com
Amelia Darby was also known as Frances Amelia Darby.1 NOTE: The information on this page is my research to date and is subject to change as I become better informed. I very much welcome any corrections or additional info you might have - my email address is at the bottom of this page. Whilst historical facts are not copyright, my writing about these facts are. If you wish to use any text from this site on Ancestry or on any other website, please ask me first - Tim Hill.
+ + + + + + + + + +

Amelia was born on Sunday, 11 April 1813 at Hertford.2,3 She was the daughter of George Darby and Elizabeth Aylott. The city of Hertford dates back to at least 673, and was an important market town surrounded by agricultural land. From the late 16th century, it had access to the London corn markets via the River Lea.

She was baptised at Lady Huntingdon's Connexion on Sunday, 8 December 1816 at Hertford.4 Lady Huntingdon's Chapel was one a series of chapels founded in the 18th century by the Countess of Huntingdon's Connexion as part of a Calvinistic movement within the Methodist church. She insisted that they should all subscribe to the doctrines of the Church of England and use only the Book of Common Prayer. It was apparently founded in 1800, and started keeping registers from 1806.

She married Laurence John Coxall, son of William Coxall and Frances (?), at St. Leonard's on Friday, 18 September 1840 at Shoreditch, London. She was 27 and her husband Laurence was 19.5 Amelia Darby was a witness at the wedding of William Skerman and her sister Mary Ann Darby at St. Pancras New Church on Wednesday, 26 October 1842 at St. Pancras, London.6,7,8

She was listed in the 1851 census at Wolfe Island, Ontario.11

On 26 January 1853 her brother John died at the approximate age of 34 in South Australia.12

Her father died 4 March 1853 at the approximate age of 74. Amelia was aged 39 when this happened.