Marge Smith was born in Adelaide in 1907, the middle daughter of James and Elsie Smith.

It isn't clear when but the Smith family had moved to Sydney by the time Marge was in her late teens. She met her future husband John Hill at Manly beach and was soon dating him. Soon after, she was working as a stenographer.

By 1936 John was a departmental manager; their only son was born two years later, and then a year after that they travelled to Europe on company business, leaving Germany a week before war was declared.

Over the next 30 years they enjoyed increasing prosperity, and Marge became interested in the arts, both as a painter but as a patron.

John retired in 1966 and they moved to South Yarra where he died in 1978 at the age of 73. Marge lived for another 9 years, eventually dying of a stroke at the age of 80. 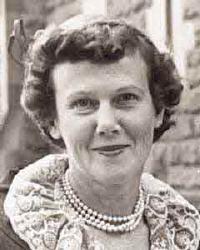 Margery was born at 137 MacKinnon Parade on Sunday, 31 March 1907 at Adelaide. This house was built by 1880 as it appears in the Smith Survey of Adelaide of that date. Made from South Australian bluestone with rendered quoins and facings to windows and doors, verandah with cast iron decorative bracket and frieze elements, and eaves brackets..1,2 She was the daughter of James Smith and Elsie Florence Darby. Her baptism name was Marjorie Jean Smith however she always referred to herself by the alternate spelling of 'Margery.' Her common name was Marge. A picture was taken of Heba and Margery Smith, their parents and their grandmother. It was almost certainly taken at Adelaide.


Not much is known of Marge's early life, but the family evidently moved to Sydney. She moved with her parents to Wagga Wagga, New South Wales, circa 1923. However, they only stayed there a year before moving to Sydney.3

John and Margery (along with John's mother Mary) attended the 'Shore' Old Boys dinner dance at The Ambassadors, in Sydney, on Monday, 5 July 1926. John was likely on the organising committee.4

John and Margery (along with John's mother Mary) attended a dinner dance organised by the School Clubs Ltd. at the Wentworth Cafe, in Sydney, on Wednesday, 4 May 1927. Also attending was 'Val' Boyle.5

John Hill and Margery Jean Smith met at at Manly beach in the Sydney suburb of Manly where John was reportedly a lifeguard. Both were very good swimmers, and Margery would go down with friends. John noticed her from his lookout tower, and one day went up and introduced himself.6 Margery lived in 1929 at at 24 Hercules St in the Sydney suburb of Chatswood.7 She was a stenographer in 1929.8

She married John Hill, a section head at General Motors Holden, son of Joseph William Hill and Mary Alberta MacCallum Bourke, at Sydney Church of England Grammar Chapel on Saturday, 2 November 1929 at North Sydney. She was 22 and her husband John was 23.. Others attending the wedding may well have included Elsie Florence Darby as mother of the bride, James Smith as father of the bride, Mary Alberta MacCallum Bourke as mother of the groom and Joseph William Hill as father of the groom, and perhaps even some of Margery's grandparents. Brothers and sisters who may have attended include Donald Nicholson Hill, Heba Gwendolyn Smith and Mavis Constance Smith. Aunts, uncles and grandparents who may have attended include Walter Thomas Smith, Lucy Deane, Donald Hugh Aloysius Bourke and Argyle Michael Bourke. John and Margery went on to have only one child together.7 She and John or Jack. Hill moved to Melbourne circa 1930 so he could take up a job at General Motors Holden; family legend says it was a job as a cleaner but a year later other sources have him as a clerk but either way, work was precious in the Depression. A photograph was taken of them early in their life together. 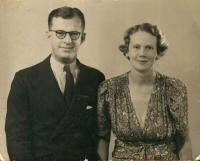 John and Margery Hill early in their life together
(source: Tim Hill collection)


Margery knitted bed jackets and sold them to the Ball and Welch department store.9 She was involved in home duties in 1930.10 Margery lived in 1930 at at 2 Highton Court, High Street in the Sydney suburb of Manly.10 Margery and John lived in 1931 at Chequers in Gisbourne Street, in East Melbourne, Victoria.11 A picture was taken of her in a new Chevrolet circa 1935.

Margery lived in 1936 at 106 George Street, in East Melbourne, Victoria. For some reason, her address was different from her husband's.11

Throughout their lives, the three sisters were very close despite being very different. They were intelligent, interested in world affairs and great conversationalists.12

It was very difficult for Margery to conceive children, and she undertook medical procedures to all this to happen.13

John and Marge Hill, Wiesbaden July 1939
(source: Tim Hill collection)
John and Margery moved to at 3 Were Street in the Melbourne suburb of Brighton in 1939.14

John and Margery moved to at 3 Highfield Grove in the Melbourne suburb of Kew in 1949.14 A picture was taken of Marge with her first Vauxhall circa 1950.

Margery is remembered as being very socially adept; this was a huge asset to John's career.20

In May 1955 Michael and his mother departed on a cruise to England on the Orcades. They met John there, then travelled through Europe. They departed to Melbourne from Naples, returning on the Orion in September of the same year.14 Margery and John lived in 1958 at at 11 Crest Avenue in the Melbourne suburb of Balwyn.21 Margery Jean Smith and John Hill arrived in Southampton on 22 September 1958. They were intending to stay for 12 days, staying at 23 Buckingham Gate in London, and they had come from New York.22 Margery Jean Smith and John Hill arrived in Fremantle, Western Australia, on 13 October 1958 after departing from London.23

She was a student at the National Gallery under painter George Frederick Henry Bell (1878–1966) for 20 years.24

Every Sunday, the young Hill family would vist Mike's parents for a meal; Mike would sit inside and watch television, whilst John would take his grandson Tim's and take him out on the patio to cook steak on the BBQ and Margery and her daughter-in-law Barbara would make salads.25 After the meal the young Hill family would go adventuring with Margery leaving the men behind. She wanted to expose the grandchildren to many aspects of life; the art gallery, the zoo, pantomines and live shows in the city. Typically this would be at the Comedy Theatre, the Princess Theatre or Her Majesty's.26

Margery never talked about her father, and never with affection for her mother who she wasn't close to.27

Margery had very narrow feet and George's was the only shop that stocked her size; whenever they had new shoes in, they would send half a dozen pairs out for her.28

Her husband John died 1978, leaving her a widow.