Mary was born in 1879 in Parkes. Her father died when she was 4, and her mother re-married. Along the way she became quite well educated.

She married Joe Hill in Wooloomooloo in 1901 when she was 21. Joe was working as an accountant, and they moved to Mosman and later to Manly. They had three boys, the eldest of whom died young.

For a while her and Joe lived next door to her brother Don and his family, and her sister lived close by until Susie spent the years of the Great War in London.

Joe's career continued to grow and he became the General Manager of the firm he was with when Maria was in her forties, so it is easy to imagine that life was comfortable for them, despite the early death of her sister Susie.

Mary was involved with her brother in funraising for St. Margaret's Hospital, and she attended a number of social occasions

Maria died young at the age of 52 of heart problems. 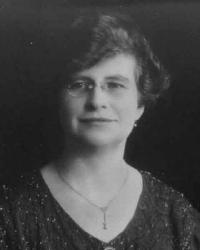 Mary was born on Friday, 14 March 1879 at Parkes, New South Wales. It is most likely that Mary's middle name "MacCallum" was in memory of the MacCallum family who owned the "Good Hope" homestead near Yass. Donald and Margaret, Mary's grandparents, apparently lived there, working for the MacCallum family in the late 1840's..1 She was the daughter of Michael Bourke and Susannah Alletta Nicholson. Mary Alberta MacCallum Bourke was also known as Marie.2

At some point, the family moved north some seven hundred kilometres to the tin-mining district near Stannifer and Michael took on the publican's licence for the Royal Hotel at the tin mining town of Tingha, New South Wales, - perhaps this was connected with his brother James' licence for this same hotel a few years earlier.

Her father died 27 November 1883 at the age of 36. Mary was aged 4 when this happened. Michael, a publican, died of alcohol poisoning in Sydney in the care of his brother.3

The next few years are a little unclear. Her mother was working for a time as a shopkeeper in the Sydney suburb of McDonaldtown when she remarried, and she also seems to have spent some time in the NSW town of Brewarrina. Along the way she became, like her siblings, quite well educated.4,5 She presumably lived with her mother at the Sydney suburb of Macdonaldtown in May 1888.6

After five years of widow-hood, their mother remarried a John Thomson on 17 May 1888 when Mary was nine. Mr Thomson was an engineer, and was eight years younger than their mother.

Although their mother's new husband called himself an engineer on his marriage certificate, he was apparently working as a publican within a year. This may have been Susannah's influence, given her family's involvement in the hotel trade. However, the situation is clouded due to how common his name was; in any event, it would seem they spent the next six years moving from pub to pub in Sydney. Nearly three years later on Thursday, 10 December 1891 a John Thomson relinquished the licence to at the Captain Cook Hotel Clyde Street in the Sydney suburb of Millers Point.7 On 23 December 1891 a John Thomson relinquished a colonial wine licence associated with at 341 Oxford Street in the Sydney suburb of Paddington.8

The Thompson family were the managers of the Como Hotel, in Como, Sutherland, New South Wales, for at least a year or so circa 1895.

She married Joseph William Hill, an accountant from Queensland, son of Henry Hugh Hill and Maria Holmes, in a Church of England ceremony at St. Peter's on Monday, 11 February 1901 at the Sydney suburb of Wooloomooloo. Witnesses to the wedding were Susan Georgina Gormon Bourke.12

Joe and Mary's signatures from their marriage certificate
Joe was employed as an accountant with the Mont de Piété Deposit and Investment Company Limited, a well-known Sydney money lending firm. He was to stay with the company for the rest of his life, eventually rising to general manager. Mary's brother Don was a publican in a hotel close-by the church Mary married in - perhaps Mary was living and/or working there.

Joe and Mary placed an advertisment in the paper on Thursday, 10 January 1907 offering 'the Whole of his ATTRACTIVE MODERN FURNITURE and HOUSEHOLD APPOINTMENTS' as he was 'relinquishing housekeeping'. It isn't known why they did this, but it may have been related to the health of her mother.16,17

September 1913 was a pretty interesting time to be in Manly, in that there were 300 smallpox patients at the quarantine station, five of whom escaped for the day in a contagious state. Just a month later, the Australian fleet made it's first entrance to Sydney Harbour with the new battlecruiser HMAS Australia in the lead.

On Tuesday, 9 October 1917 Ivy Pearl Owens entertained Mary Hill, Mary Gahan and three other women in the Winter Garden of the Hotel Australia, in Sydney, just before her departure to Melbourne.23 A photograph was taken of the Bourke and Hill houses in at 32 and 30 Addison Street, Manly c.1918.

Donald Hugh Aloysius Bourke and Ivy Pearl Owens and his sister Mary and their neighbour Frank Gahan were involved in organising the Blossom dance and euchre party at at Paddington Town Hall in the Sydney suburb of Paddington on Tuesday, 14 October 1919 in aid of St. Margaret's. It seems Mary's husband Joe was not involved in the organising but attended.26,27

Mary and Joseph were hosted at the the Wentworth Cafe, in Sydney, by Mary's brother Don and his wife Ivy on Monday, 17 May 1920 and again on Friday of the same week.28

Joe and Mary visited at Brighton Hotel in the Sydney suburb of Brighton-Le-Sands in February 1921 along with Mary's brother Don and Don's wife Ivy, as well as members of Ivy's family.29

Joseph William Hill and Mary Alberta MacCallum Bourke attended a kimino dance on Wednesday, 6 September 1922; apparently, Joseph was one of a number of people who 'entertained' at the function.35

On Saturday, 5 May 1923 John Hill was one of the Shore school eight who competed in the Regatta on the Parramatta river. Although the Shore team came last of four teams, it was seen as a significant acheivement. Eleven days later Mary Alberta MacCallum Bourke gave a tea party which John acted as host.36,37

Ivy and Mary attended the races at at Randwick racecourse in the Sydney suburb of Randwick and had their dresses commented on in the papers. Ivy wore "brown with a hat trimmed with Autumn leaves" and Mary's "navy marocain frock was finely beaded and worn with a cloche hat with French flowers."41 Joe and Mary as well as Donald and Ivy (and a number of others) were entertained at a 'gay dinner dance' at Sydney hosted by Sister Kerven on Tuesday, 5 February 1924.42

On Saturday, 7 June 1924 her dear sister Susan died of cancer, no doubt a blow for this tight-knit family.45

On Monday, 8 September 1924 Mary presided at a meeting of the committee of the St. Margaret's Hospital held at Sydney, welcoming Mrs. H. D. McIntosh, one of the life goveners. Her sister in law Ivy Bourke also attended.46 Donald and Ivy (and his sister Mary) attended a function at Sydney in aid of the Police Hospital Fund.47

Mary Alberta MacCallum Bourke presided over a meeting over the lady's committee at the Outpatient's Department on 9 February 1925 at St. Margaret's Hospital for Women, in Sydney.48 Mary and Joseph lived in 1925 at at 'Woniora' 58 (now 30) Addison Road in the Sydney suburb of Manly. They also had the telephone connected (Manly 1013), as had the Bourke's next door.49,50

Mary and her brothers' wives Ivy and Daisy along with Ivy Nicholson were among 400 people who attended the 'Beaucaire Ball' at Sydney on Tuesday, 1 September 1925.51

Mary accompanied her son John and Margery Jean Smith when they attended the 'Shore' Old Boys dinner dance at Sydney on Monday, 5 July 1926. John was likely on the organising committee.52

Mary accompanied her son John and Margery Jean Smith when they attended the 'Shore' Old Boys dinner dance at Sydney on Wednesday, 4 May 1927. John was likely on the organising committee.53

Mary was perhaps the 'Mrs. Hill' who attended a function organised in support of St. Margaret's Hospital (that her brother was president of).54

Mary Alberta MacCallum Bourke was scheduled to play in the Manly Open Foursomes tennis on 16 March 1929 at the Sydney suburb of Manly.56 Mary, as the mother of the groom, attended John or Jack. Hill and Margery Jean Smith's wedding at Sydney Church of England Grammar Chapel on Saturday, 2 November 1929 at North Sydney.57

However, shortly after their wedding their son Geoffrey and his new wife moved to Melbourne.

Mary died on 28 November 1931 at Sydney at age 52 of cardiac failure. It is perhaps fitting that she died at the hospital she had been so active in supporting.58,59 Her body was interred at Church of England section of the general cemetery on 28 November 1931 at the Sydney suburb of Manly. She was buried with her husband (section J.148).58,2

Mary's will was probated on 10 October 1934. The estate was granted to the Permanent Trustee Company of NSW in 1934, after the death of her husband Joseph. This is the same disposition as his estate..