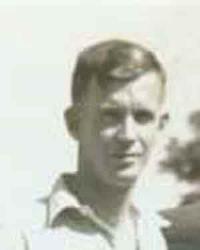 Donald was born in 1911.1,2 He was the son of Joseph William Hill and Mary Alberta MacCallum Bourke. Helived with his parents at at 'Woniora' 78 Osbourne Road in the Sydney suburb of Manly in 1912. This extended family, which at that time included Mary's sister Susie until she moved to London, were to live in this house until about 1917, when they moved to 58 (now 30) Addison Road, next door to Mary's older brother Don on one side, and their friends the Gahan's on the other. Joe and Mary were to stay in this house for the rest of their lives.3 Donald Nicholson Hill was to walk with a limp and use a cane in later years, perhaps due to an illness or injury early in life.4 Helived with his parents at at 'Woniora' 58 (now 30) Addison Road in the Sydney suburb of Manly in 1925. They also had the telephone connected (Manly 1013), as had the Bourke's next door.5,6

He almost certainly attended the wedding of his brother in the marriage of John Hill and Margery Jean Smith at Sydney Church of England Grammar Chapel on Saturday, 2 November 1929 at North Sydney. John and Margery went on to have only one child together.7

His mother died 27 November 1931 at the age of 52. She had been admitted to Mount St. Margaret's hospital in Ryde in August, four months previously.8 By 1933, Donald had returned home to live with his father Joe.9 He was a clerk in 1933.9

Donald died on 16 April 1982 at Sydney at the approximate age of 71.1,21 His body was interred at Eastern Suburbs crematorium on 4 June 1982 at the Sydney suburb of Matraville. Plot: Crematorium Chapel Gardens, Garden D7, Position 382.22