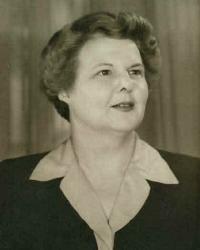 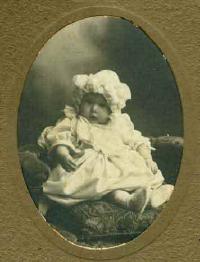 Heba Smith aged six months
NOTE: The information on this page is my research to date and is subject to change as I become better informed. I very much welcome any corrections or additional info you might have - my email address is at the bottom of this page. Whilst historical facts are not copyright, my writing about these facts are. If you wish to use any text from this site on Ancestry or on any other website, please ask me first - Tim Hill.
+ + + + + + + + + +

Heba was born on Tuesday, 11 April 1905 at North Adelaide.2,1,3 She was the daughter of James Smith and Elsie Florence Darby. Heba Gwendolyn Smith was also known as Heba Gwendoline Smith. She presumablylived with her parents at 137 MacKinnon Parade, in Adelaide, in March 1907. This house was built by 1880 as it appears in the Smith Survey of Adelaide of that date. Made from South Australian bluestone with rendered quoins and facings to windows and doors, verandah with cast iron decorative bracket and frieze elements, and eaves brackets.4,5 A picture was taken of Heba and Margery Smith, their parents and their grandmother. It was almost certainly taken at Adelaide.

The Bourke and Hill houses in Addison Street, Manly c.1918
(source: Tim Hill collection)
She moved with her parents to Wagga Wagga, New South Wales, circa 1923. However, they only stayed there a year before moving to Sydney.6 Heba's occupation was given as 'home duties' in May 1929.3 Hebalived in May 1929 at the Sydney suburb of Potts Point.3

She married Frank Gordon Hocken, a wireless engineer, son of James Preston Hocken and Helen Sophia Mason, in an Anglican ceremony at St. Johns Bishopthorpe on Wednesday, 22 May 1929 at the Sydney suburb of Glebe. She was 24 and her husband Frank was 26..3

Throughout their lives, the three sisters were very close despite being very different. They were intelligent, interested in world affairs and great conversationalists.10 Heba and Franklived in 1937 at at 14 Court Road in the Sydney suburb of Edgecliff.11

Her husband Frank died 1975, leaving her a widow. Hebalived in 1986 at Kincumber, New South Wales.

Heba died on 27 September 1986 at Kincumber, NSW, at age 81.16 She was buried at Palmdale crematorium, in Palmdale, New South Wales.17

Heba was remembered as a 'robust hearty person.18'