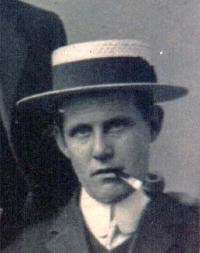 James Smith
(source: Margery Smith)
James was involved in a court case where an employee George Brewer was charged with false pretences in connection with the sale of some land. James said the Brewer was only employed on commission.1 NOTE: The information on this page is my research to date and is subject to change as I become better informed. I very much welcome any corrections or additional info you might have - my email address is at the bottom of this page. Whilst historical facts are not copyright, my writing about these facts are. If you wish to use any text from this site on Ancestry or on any other website, please ask me first - Tim Hill.
+ + + + + + + + + +

James was born on Tuesday, 11 October 1881 at the Adelaide suburb of Gilberton.2 He was the son of Walter Thomas Smith and Lucy Deane. James Smith was baptized at Holy Trinity Church on Sunday, 11 December 1881 at Adelaide.3 He presumably lived with his parents at Cape Borda, Kangaroo Island, South Australia, in August 1898.4

The Smith family hosted a social evening at their house at Cape Borda, Kangaroo Island, South Australia, for the Cape Borda Christian Endeavor Society, and the three girls and two of the men contributed songs and recitations.5

We can't know how James and Elsie met, but it may have been through a family association. James's father was a lighthouse keeper and Elsie's cousin John Darby was Secretary of the Marine Board; both men had met Arthur Searcy and John Darby must have known him well.

He married Elsie Florence Darby, daughter of George Leonard Darby and Patty Miller, at "Kiliora"(?) Stanley St. on Thursday, 22 December 1904 at North Adelaide. He was 23 and his wife Elsie was 20. Elsie was 5 months pregnant when she married; the effect of this on Elsie's strict Wesleyen Methodist mother isn't known however it is notable that Elsie and James married at Elsie's parent's home and not the Congregational church that her sisters were married in. Elsie was the daughter of a public servant. Witnesses to the wedding were Mabelle Gertrude Darby and Patty Miller.6 James lived in 1904 at Adelaide.7 At this time his occupation was given as a clerk.8,9 Jim and his brothers Edward and Arthur had their photos taken together c1905.

His youngest daughter Pattie recollects that he was not much of a family man and that he drank too much.24,25

James lived in 1929 at the Sydney suburb of Randwick.26 James, as the father of the bride, attended Margery Jean Smith and John or Jack. Hill's wedding at Sydney Church of England Grammar Chapel on Saturday, 2 November 1929 at North Sydney.27 James lived in March 1930 at Sydney.28

His father died 19 March 1930 at the age of 78. James was aged 48 when this happened.29 25 September 1931 there was a determination in a Worker's Compensation hearing between 'Patricia Smith and her next best friend James Agincourt Smith', and Anne Matheson. This probably related to Pattie being emplyed by Anne Matheson but was represented in some capacity by her father.30 He was manager of the Metropolis Realty Development (NSW) Co Ltd in July 1932 at Sydney.1 He was a salesman in 1933.31 James and Elsie lived in 1933 at at Cliveden Flats, Roslyn Street in the Sydney suburb of Darlinghurst.31

His mother died May 1943 at the approximate age of 84. James was aged 61 when this happened. Jim and Elsie had a photograph taken together c1945.

In the middle of his life, James seemingly adopted 'Agincourt' as his middle name.32,33,30 James and Elsie lived in 1949 at at Kanimbla Hall in Tusculum St. in the Sydney suburb of Potts Point.32

In later years, his daughter Margery never talked about her father, and never expressed affection for her mother who she wasn't close to.35