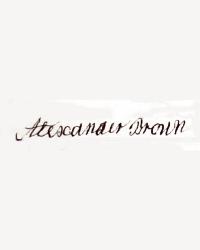 Camera 360
NOTE: The information on this page is my research to date and is subject to change as I become better informed. I very much welcome any corrections or additional info you might have - my email address is at the bottom of this page. Whilst historical facts are not copyright, my writing about these facts are. If you wish to use any text from this site on Ancestry or on any other website, please ask me first - Tim Hill.
+ + + + + + + + + +

Alexander was born on Saturday, 24 September 1825 at Scotland.1 He was the son of John Brown and Margaret Miller. Alexander Brown was baptized on Sunday, 16 October 1825 at Gorbals, Glasgow.1

At the age of 13 Alexander emigrated from Liverpool on 28 February 1839 on the 'Heber' with his parents and siblings. The ship embarked with 178 emmigrants. The family was brought out by Donald McIntyre of Invermein, one of a number of private Scottish emigrant operators who had settled in Australia - he brought out 57 emigrants on the 'Heber', nearly all country people from the Highlands; shepherds and labourers and their families.2,3,4 After a voyage of nearly 6 months Alexander arrived at Botany Bay on 27 July 1839 with his parents and siblings. The ship's first port of call had been the Cape of Good Hope, where they embarked a further two passengers. They left the Cape on the 28th of May 1839. The trip was not without tragedy; 5 children died on the voyage.2,5

Alexander lived in August 1852 at Sydney.6

He married Mary Ann MacKenzie, daughter of Alexander MacKenzie and Mary Ann (?), at St. Stephen's Presbyterian Church in Fort Street on Tuesday, 10 August 1852 at Sydney. Witnesses to the wedding were Donald Brown and Frances Cameron Ross Brown.7,8 Alexander Brown was a witness at the wedding of Robert Grigg and his sister Frances Cameron Ross Brown at St. Andrew's Scots Presbyterian Church on Thursday, 16 November 1854 at Sydney.9 Alexander Brown was a ship wright in July 1855.10 Alexander and Mary lived in July 1855 at Balmain.10 Alexander and Mary lived in September 1857 at Balmain.11 Alexander lived in 1859 at Balmain.12 He was described as a man with a red beard circa 1860.13 Alexander lived in 1861 at St. Andrews Street, in Balmain, New South Wales.14 He was a witness at the wedding of William Minchell and Sarah MacKenzie at St. Andrews Street on Monday, 26 January 1863 at Balmain, New South Wales.15

His father died 13 February 1863 at the approximate age of 73. Alexander was aged 37 when this happened.

John Brown's son Alexander had a funeral notice placed in the paper on 14 February 1863:
" FUNERAL.-The Friends of Mr. ALEXANDER BROWN are respectfully requested to attend the funeral of his late departed father, JOHN The procession to move from his son's residence, St. Andrew's-street, Balmain, THIS (Saturday) AFTERNOON, at half-past 2 o'clock. REUBEN THOMAS, undertaker, 141, York street, near the Wesleyan Chapel."16

Alexander may have died on 6 June 1892 at at 117 Beattie Street in the Sydney suburb of Balmain at age 66 however there is some uncertainty about this.17,13