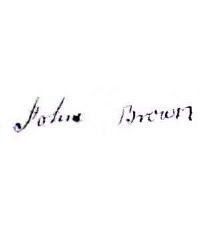 John and his wife Margaret emigrated with their six children from Liverpool on 28 February 1839 on the 'Heber'. His age was recorded as being 40 years in March 1838 but be was actually 49. The ship embarked with 178 emmigrants. The family was brought out by Donald McIntyre of Invermein, one of a number of private Scottish emigrant operators who had settled in Australia - he brought out 57 emigrants on the 'Heber', nearly all country people from the Highlands; shepherds and labourers and their families.8,9,10 After a voyage of nearly 6 months John and his wife Margaret arrived at Botany Bay on 27 July 1839 with their children. The ship's first port of call had been the Cape of Good Hope, where they embarked a further two passengers. They left the Cape on the 28th of May 1839. The trip was not without tragedy; 5 children died on the voyage.8,11

John, as the father of the bride, attended Agnes Brown and John Cameron's wedding at St. Andrew's Scots Presbyterian Church on Thursday, 31 August 1848 at Sydney.12 John (and presumably his spouse Margaret) lived in October 1848 at Balmain.12

There was a John Brown who was a timber merchant in Lane Cove, New South Wales in 1858 and again 4 years later (who was fined £2 for failing to report as a juror.)13,14 John Brown was a sawyer in February 1863.3

John Brown's son Alexander had a funeral notice placed in the paper on 14 February 1863:
" FUNERAL.-The Friends of Mr. ALEXANDER BROWN are respectfully requested to attend the funeral of his late departed father, JOHN The procession to move from his son's residence, St. Andrew's-street, Balmain, THIS (Saturday) AFTERNOON, at half-past 2 o'clock. REUBEN THOMAS, undertaker, 141, York street, near the Wesleyan Chapel."15
His body was interred at South Ground (Old Burial Ground in Devonshire Street) on 15 February 1863 at Sydney.3