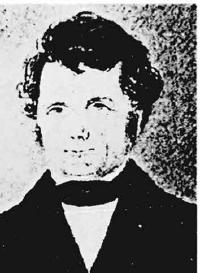 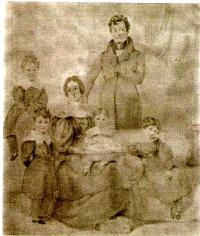 Kennedy was born on Sunday, 4 August 1799 at Norfolk Island, Australia. He was the son of Kennedy Murray and Anne White.

He married Sarah McQueen, daughter of Francis How and Catherine Jones, on Monday, 18 January 1819 at Port Dalymple, Tasmania. He was 19 and his wife Sarah was 13. Kennedy Murray was poundkeeper, responsible for rounding up stock.2 In his adulthood Kennedy made a living as as a farmer.

In 1835, Kennedy was appointed the inaugural chief constable of 1835.3

He married Hannah Goodall, daughter of Francis Goodall and Sarah Goodwin, in a Presbyterian ceremony on Wednesday, 1 May 1839 at the small Tasmanian town of Evandale. He was 39 and his wife Hannah was 24.4 Kennedy, aged 51 and Hannah Goodall, aged 35 became the parents of Jane Maria Murray on Friday, 6 September 1850 at Evandale.5


Kennedy died on 30 November 1860 at Evandale at age 61 after having a leg amputated. His body was interred at St. Andrews Anglican on 2 December 1860 at the small Tasmanian town of Evandale.