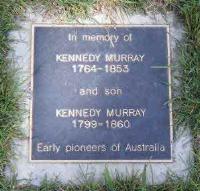 
Direct descendants of John and Kennedy Murray have had their DNA tested and their DNA matches the head of the MacGregor clan. This indicates that John and Kennedy were in fact MacGregors. MacGregor was a banned surname in Scotland and Murray was a common alias.2 Kennedy Murray was probably baptised on Saturday, 24 August 1771 at Dundonald, Ayreshire, Scotland. He was apparently born out of wedlock.3,1 He was the son of John Murray and Elizabeth Calder.1

On Wednesday, 7 December 1785, Kennedy and four others were apprehended at Glasgow for shop-breaking and lodged in prison.4 He was charged with stealing "three small table knives with bone handles, three small knives with hart-horn handles, a pair of striped garters with some knittings with a pair of plated buckles".5

Kennedy was sentenced at Glasgow Court of Justiciary, Glasgow on 21 September 1786:
Kennedy Murray was accused of theft, and having petitioned for banishment, the same was consented to, on account of his youth and some other favourable circumstances; and he was sentenced to transportation for fourteen years, and seven years’ service.
This was reported in the Caledonian Mercury on Sat 23 Sep 1786 on p. 3.6,7,5 Historian Susan Jamieson from the University of Sydney suggests that he had prior convictions, and that it is likely that he had help writing his petition.8

He was imprisioned in the Tolbooth prision, in Glasgow for 4 years.9

He was relocated to a prison hulk in Plymouth for a further two years.9 Kennedy Murray was transported to Sydney Cove on the 'Pitt' from Yarmouth, departing 17 July 1791 and arriving 14 February 1792.10,11

After his arrival in New South Wales, Kennedy was sent to Toongabbie convict settlement, in Sydney.12,13 At Toongabbie "[t]he convicts were worked so hard, it developed a reputation as a place to be avoided at all costs."14

Kennedy his time at Sydney could not have been easy.:
By December 1792, Toongabbie had fulfilled Phillip's intention of becoming the principal farm of the colony with over 696 acres (281.6 hectares) of wheat, barley and maize while Parramatta's cultivation had dwindled to 316 acres (127.8 hectares). Most of the government's stock of cattle, horses and sheep were kept at Toongabbie as well. The settlement came to be self-sufficient with a barber, shoemaker, tailor, thatcher, miller and eight constables as well as convict overseers. Toongabbie was designed to accommodate a convict workforce of 700. But its convict population swelled to over a thousand, including 260 women, many boys and some "old and feeble men" who were hutkeepers. Convicts worked from 5 am till 10 am, rested til 2 pm then worked until sunset. Work included felling trees, piling them up for burning, digging out stumps and turning the ground with spades and hoes.Convicts were employed in raising grain, maintaining the township infrastructure and in looking after the government stock of cattle, horses, sheep, goats, pigs and chickens
It was a hard place to be for a 21 year old a long way from home and family.15

Kennedy apparently returned to Sydney on the 'Hannington', abandoning Anne and their two children on Norfolk Island.5,16

Kennedy was granted 30 aces of land near Windsor, New South Wales in 20 November 1809.5

For a time, Kennedy and his son John were living in 3 huts in Pittwater, New South Wales, perhaps with a domestic servant.20

In later years he moved to the small Tasmanian town of Evandale and lived in a barn on his son's property. He became a local celebrity, and was thought to be a friend of the artist John Glover.21