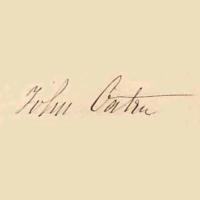 John Oaten's signature, June 1855
[Source: Marriage Certificate, St. Peter's Eastern Hill, Melbourne]
NOTE: The information on this page is my research to date and is subject to change as I become better informed. I very much welcome any corrections or additional info you might have - my email address is at the bottom of this page. Whilst historical facts are not copyright, my writing about these facts are. If you wish to use any text from this site on Ancestry or on any other website, please ask me first - Tim Hill.
+ + + + + + + + + +

John was born circa 1802 at Taunton, Somerset.1,2,3 He was the son of John Oaten and Hannah Tamsey. John Oaten was baptised at St. George's on Wednesday, 17 March 1802 at Wilton, Somerset.4,5 He presumably moved with his parents to London circa 1811. It isn't clear what prompted the move.3 John Oaten was indentured to John Shave confectioner / pastrycook for 7 years circa 1816 at 51 Curzon Street, St. George Hanover Square, London.3 John's employer John Shave died circa 1824 leaving him to carry on the business with his widow Ann.6

At or near the end of John Oaten's apprenticeship, John Shave died. Whether for romantic or practical reasons, John Oaten and Ann Weems formed a bond.

He married Charlotte Amelia Pellett, daughter of Hugh Pellett and Charlotte Amelia May, in a Church of England ceremony by licence at St. George's Hanover Square on Monday, 6 September 1830 at London. John was married two weeks after his younger sister Harriet in the same church.. Charlotte was the daughter of a labourer..9,10

In John Oaten's will William Edward Gillett and John Oaten were named joint executors by John to handle his estate on 21 March 1837. John was also to receive his father's gun..3

He was recorded as head of household in the 1841 census with Charlotte Amelia Pellett (which other records indicate is his spouse) at Hanover Square, London. He was recorded as being 35 years old. Also in the house were two of their young children.14 John (and presumably his spouse Charlotte)lived circa 1842 at Newland Street, in Belgrave, London.11

John and Charlotte Amelia Pellett may have become the parents of Charles Oaten on Saturday, 27 May 1843 at St. George Hanover Square Registration District, London.15,2

He was recorded as head of household in the 1851 census with Charlotte Amelia Pellett as his spouse at 13 Jubilee Place, Chelsea, London. His age was recorded as being 49 years old. Also living in the house were one of their daughters and five of their sons.2,17 John Oaten was a cook and confectioner in April 1851.2

COURT FOR RELIEF OF INSOLVENT DEBTORS.
See Notice at the end.
The following PERSONS, who, on their several Petitions filed in the Court, have obtained Interim Orders for protection from process, are required to appear in Court as hereinafter mentioned, at the Court-House, in Portugal street, Lincoln's-Inn, as follows, to be examined and dealt with according to the Statute:
John Oaten, formerly of No. 4, Newland-street, Eaton square, Middlesex, Cook, afterwards of No. 10, Caroline street, Eaton-square aforesaid, Cook, then of No. 1, Park place, Petersham, Surrey, Cook at the Star and Garter, Richmond, Surrey, afterwards of Kew Foot-lane, Richmond aforesaid, Cook, then of No. 4, Cambridge place, Paddington, Middlesex, Cook to her Majesty's 2nd Regiment of Life Guards, and now of No. 13, Jubilee-place, Chelsea, Cook to Mr. Win. Walter Mabey, of No. 33, New Bond-street, Middlesex, Turtle Dealer.17
John (and presumably his spouse Charlotte)lived in September 1853 at Kings Parade, in Chelsea, London.18

Given his insolvency, it isn't surprising that he chose to emigrate to the colonies to have a fresh start. He sought passage, describing himself as a steward.19

His wife Charlotte died 12 July 1862 at the approximate age of 58, leaving him a widower. Johnlived in 1863 at at 46 Oxford Street in the Melbourne suburb of East Collingwood.29

John, as the father of the groom, attended the wedding of Charles and Harriet Louisa Roberts, a domestic born in Tasmania, a civil service at the Registry Office on Saturday, 25 February 1865 at the Melbourne suburb of Fitzroy. Harriet had to get prior permission from a JP due to her age. It's not clear why they chose a civil service over a religious one. Others who may have attended include . Harriet and Charles went on to have six children together, three of whom lived into their adulthood.30 Johnlived in 1866 at at 75 Smith Street in the Melbourne suburb of Fitzroy.31 Johnlived in April 1866 at at 23 Stanley Street in the Melbourne suburb of Collingwood.32

John died on 11 April 1866 at Melbourne. He was aged about 64.1,32,5 His body was interred at Melbourne General Cemetery at the Melbourne suburb of Carlton.33