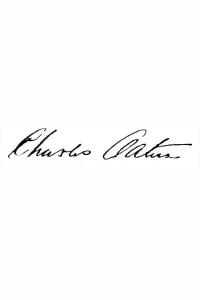 Charles Oaten signature
Source: his 1865 wedding certificate
NOTE: The information on this page is my research to date and is subject to change as I become better informed. I very much welcome any corrections or additional info you might have - my email address is at the bottom of this page. Whilst historical facts are not copyright, my writing about these facts are. If you wish to use any text from this site on Ancestry or on any other website, please ask me first - Tim Hill.
+ + + + + + + + + +

His mother died 12 July 1862 at the approximate age of 58. Charles was aged 19 when this happened. He presumablylived with his parents at at 46 Oxford Street in the Melbourne suburb of East Collingwood in 1863.14 He was a carter, at least for some of time for Broadbent Brothers & Co. His brother was also employed by them. This firm would, amongst other things, deliver goods from Spencer Street railyards to businesses in the surrounding areas. They also operated in Geelong Ballarat and Bendigo. in February 1865.15,16,17,18,19 Charleslived in February 1865 at at 5 Marion Street in the Melbourne suburb of Fitzroy.15

He married Harriet Louisa Roberts, a domestic born in Tasmania, daughter of Thomas Roberts and Sarah (?), a civil service at the Registry Office on Saturday, 25 February 1865 at the Melbourne suburb of Fitzroy. Harriet had to get prior permission from a JP due to her age. It's not clear why they chose a civil service over a religious one. The wedding certificate was also signed by Helen Messinger Wallis. Others who almost certainly attended the wedding include John Oaten as father of the groom. Brothers and sisters who may have attended include Lucy Young, Elizabeth Oaten, Amelia Oaten, John Oaten, Henry William Oaten, Albert Edward Oaten and Frederick Edmund Oaten. Harriet and Charles went on to have six children together, three of whom lived into their adulthood.15 Charles (and presumably his spouse Harriet)lived in November 1865 at at 126 Gertrude Street in the Melbourne suburb of Fitzroy. This house was a 2 room house.20

Charles, aged 22 and Harriet Louisa Roberts became the parents of Charles Henry Oaten on Monday, 22 January 1866 at at 124 Gertrude Street in the Melbourne suburb of Fitzroy.21,22

The Oaten family moved frequently between rented houses in Fitzroy in the late 1860's and early 1870's. In January 1867 they were in a two-room brick house at 75 St. David Street, before moving on to 16 Alma Street (a three-room brick house) and then next door at number 14 - back to a two room house. Both of these houses were owned by George Butler who lived at number 20.23,24,25

On circa 1870 his son George died at the approximate age of 4.

They initially lived in a wooden house on Sackville Street, right on the corner of Smith Street This house was rented from John Tulloch who lived next door. However, in about 1875 they moved two doors up to a house initially rented from a Miss Scott, and then from Thomas Latham, a clerk who briefly lived next door.34,33,31,29,44 Charles (and presumably his spouse Harriet)lived at at 14 Sackville Street in the Melbourne suburb of Collingwood.54

His wife Harriet died 6 March 1884 at the approximate age of 36, leaving him a widower at age 40. She had been suffering from convulsions for a year.54

Father and son Charles and Charles were apparently significant figures with the Britannia Football Club ('The Brits'). Charles was an official and Charles was a player, as were Thomas Hamilton Battle and John Charles Battle.63

By 1888, Charles and Catherine had moved out from his house to an adjoining house.

When his daughter-in-law Kate died in 1901, Charles was apparently unwilling to help his son and grandchildren. The reasons for this can only be guessed at, but seem to be because his son Charles married a Catholic. In any event, the girls were raised by the nuns at Abbostsford convent and the boys were sent to a Catholic boys home (perhaps St. Vincent de Pauls) in South Melbourne. The youngest child was fostered out and eventually became a ward of the state. It was only with Charles' death that monies that had held in trust for them became available. There is also a suggestion that their aunt Lottie's husband, a man called Reaby, swindled the money.64

Charles died on 24 April 1914 at at "Hillstead" Munro street in the Melbourne suburb of Coburg at age 70. Charles was living with his daughter Charlotte and her husband William Reaby at the time of his death. the house he died in was designed by George De Lacy Evans, a notable Melbourne Architect.66,67,68,69