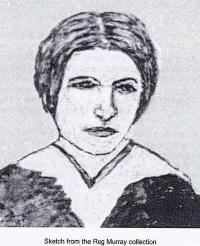 Ann Parker (from the Reg Murray Collection)
NOTE: The information on this page is my research to date and is subject to change as I become better informed. I very much welcome any corrections or additional info you might have - my email address is at the bottom of this page. Whilst historical facts are not copyright, my writing about these facts are. If you wish to use any text from this site on Ancestry or on any other website, please ask me first - Tim Hill.
+ + + + + + + + + +

However, only Mary was found guilty and was convicted for transportation with a sentence of 7 years.3 Ann Parker was transported to Sydney on the 'HMS Glatton' arriving 11 March 1803.4,5,6

By 1806, aged about 20, Mary had a ticket of leave and was living with a William Hembridge / Hambridge / Ambridge, aged about 28.3

Circa 1810, Kennedy Murray and Ann Parker began a relationship.3 She was given her certificate of Freedom on 1 June 1810.3 Ann and Kennedy lived in 1814 at Windsor, New South Wales. They were living "off stores" with two children.3

She married Kennedy Murray, son of John Murray and Elizabeth Calder, Both had previously been convicts at St. Philips on Monday, 14 March 1814 at Sydney, New South Wales. She was 28 and her husband Kennedy was 42. This was a wattle and daub church, burned down in 1798..7,8

By 1823 (but perhaps early as 1820), Ann was admitted to the Castle Hill lunatic asylum, in Sydney; it is thought she suffered from epilepsy.9,10,3

Kennedy and Ann Four children of Kennedy and Ann were admitted to an Male Orphan School at Cabramatta on 22 October 1823:
Resolved that the four children of Murray aged from 3 to 10 years whose mother died insane at Castle Hill, and whose father is stated to be now insane be admitted into the school
However, it is almost certain that Ann wasn't dead and that there is no record that Kennedy was ever admitted to the asylum. The oldest son John probably remained with his father.9,11

She was transferred to at Gladesville Hospital for the Insane in the Sydney suburb of Lilyfield (then named Tarban Creek Asylum) in 1838.3

She was described in 1844 as "harmless" and a prisoner, although this was incorrect.3 She was reputedly the longest asylum resident in NSW with a stay in excess of 40 years.12

Ann may have died in 1874 at the Sydney suburb of Parramatta.16