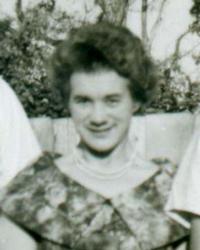 Margaret was born on Sunday, 31 August 1919 at Melbourne. She was the daughter of John Albert Hume and Alice Elizabeth Charlotte Eldridge.

She was a bridesmaid at Violet Agnette Oaten and Harold John Neill's wedding on Saturday, 20 January 1940 at at St. John's Church of England in the Melbourne suburb of Camberwell. The marriage was featured on the 'Weddings and Engagements' page of The Age and included a photo. Harold and Violet went on to have two children together.. Harold was an ex-football player.1,2 In her adulthood Margaret made a living as an analytical chemist's assistant. Margaret was enlisted with the the canteen service in World War 2.

She married Charles Henry Oaten, a linesman, son of Albert Edward Oaten and Violet Barbara Cheyne, in a Church of England ceremony at All Saints on Saturday, 28 August 1943 at the Melbourne suburb of Kooyong. She was 23 and her husband Charles was 25.. Others who may have attended the wedding include an unknown person as mother of the groom. Brothers and sisters who may have attended include Violet Agnette Oaten and Mavis Lily Oaten. Margaret and Charles went on to have just one known children together. As of 1946, Margaret Alice Hume was also known as Marjorie Alice.3 She wasliving with her mother-in-law at at 106 Robinson Road in the Melbourne suburb of Hawthorn in 1946. Her husband apparently lived in the same street but at a different address.3 She presumablylived with her spouse Charles at at 45 Lansdown Street in the Melbourne suburb of North Balwyn in September 1962.4