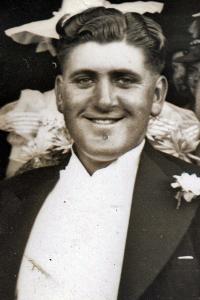 Charles Henry Oaten
His common name was Charlie. NOTE: The information on this page is my research to date and is subject to change as I become better informed. I very much welcome any corrections or additional info you might have - my email address is at the bottom of this page. Whilst historical facts are not copyright, my writing about these facts are. If you wish to use any text from this site on Ancestry or on any other website, please ask me first - Tim Hill.
+ + + + + + + + + +

Charles was born on Friday, 22 February 1918 at the Melbourne suburb of Clifton Hill.1 He was the son of Albert Edward Oaten and Violet Barbara Cheyne.

His father died 2 May 1919 at the age of 31. Charles was aged 1 when this happened. He died of influenza during the epidemic.

For the next 5 years, Violet and her children moved addresses a number of times. In 1924 she was living at 162 Queens Parade in North Fitzroy, then seven years later was at 3 Groom Street.2,3

He likely attended the wedding of his sister in the marriage of Hubert Nicholson and Mavis Lily Oaten in a Church of England ceremony at All Saints on Saturday, 17 February 1934 at the Melbourne suburb of Kooyong. Mavis married with the consent of her mother. They went on to have some eight children together, only two of whom reached adulthood.4,5

Five years after that she was living at 68 Riversdale Road Glenferrie, then at 39 Currajong Avenue Camberwell in 1939.6,7

He gave his sister the bride away at the marriage of Violet Agnette Oaten and Harold John Neill, an ex-football player, at St. John's Church of England on Saturday, 20 January 1940 at the Melbourne suburb of Camberwell. Harold and Violet went on to have two children together.8 He was a student at at Swinburne college in 1940. Charles Henry Oaten was a linesman in 1942.7

He married Margaret Alice Hume, daughter of John Albert Hume and Alice Elizabeth Charlotte Eldridge, in a Church of England ceremony at All Saints on Saturday, 28 August 1943 at Kooyong. He was 25 and his wife Margaret was 23.. Others who may have attended the wedding include an unknown person as mother of the groom. Brothers and sisters who may have attended include Violet Agnette Oaten and Mavis Lily Oaten. Margaret and Charles went on to have just one known children together. Charles was a warrant officer with the Royal Australian Signals in WWII. Charles lived in 1946 at at 44 Robinson Road in the Melbourne suburb of Hawthorn.9 In his adulthood Charles made a living as an electrical engineer perhaps for Amalgamated Wireless Australia (AWA.)10 Charles (and presumably his spouse Margaret) lived in September 1962 at at 45 Lansdown Street in the Melbourne suburb of North Balwyn.11 Charles provided information on the death of his mother Violet Barbara Cheyne, on 14 September 1962, at at 45 Henry Street in the Melbourne suburb of Northcote at age 44.11,12

His mother died September 1962 at the age of 73. Charles was aged 44 when this happened.