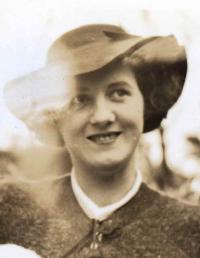 Her father died 1930. 'Boy' Nicholson and Mavis 'Micky' Oaten met when Mavis and Hubert's sister Jeanne both worked at the Coles Department Store in Glenferrie Road. Jeanne invited Mavis home to their house in Coppin Grove, and it started there. Hubert's teenage brother Bon was also attracted to Mavis, but it was the older Hubert who won out.6

She likely attended the wedding of her brother in the marriage of Hubert Nicholson and Mavis Lily Oaten in a Church of England ceremony at All Saints on Saturday, 17 February 1934 at the Melbourne suburb of Kooyong. Mavis married with the consent of her mother. They went on to have some eight children together, only two of whom reached adulthood.7,8

She lived with her mother at at 8 Coppin Grove in the Melbourne suburb of Hawthorn in 1936.9 Jeanne Marie Louise Augusta Nicholson was a saleswoman in 1936.9

She married James Victor Armstrong, in 1936.10 Jeanne Marie Louise Augusta Nicholson was a shop assistant in her adulthood.

Jeanne died on 23 September 2003 at Melbourne at age 93.1 Her body was interred at Springvale Crematorium at the Melbourne suburb of Springvale.1