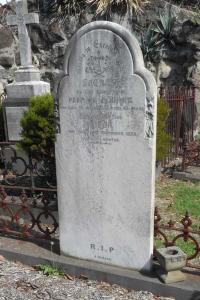 Patrick Bourke, buried with his son Peter.
Source: Find a Grave
NOTE: The information on this page is my research to date and is subject to change as I become better informed. I very much welcome any corrections or additional info you might have - my email address is at the bottom of this page. Whilst historical facts are not copyright, my writing about these facts are. If you wish to use any text from this site on Ancestry or on any other website, please ask me first - Tim Hill.
+ + + + + + + + + +

He may have married Mary Ann Cannon, in 1842 at Tipperary, Ireland..3,1 At the time of their emigration, both Patrick and Mary were illiterate. Patrick was still signed his daughter Bridget's marriage certificate with a cross 18 years later.2,4

Patrick and Mary Ann Cannon became the parents of Michael Bourke on Wednesday, 23 June 1847 at Melbourne.7

Patrick's child Michael received his baptism at St. Francis' on Monday, 12 July 1847 at Melbourne. He was baptised in a Roman Catholic ceremony. St. Francis' Church had only recently been constructed.7

Patrick's child James received his baptism on Monday, 17 September 1849 at Melbourne. he was baptised in a Roman Catholic ceremony.8

Patrick's child Mary received her baptism at St. Francis' on Monday, 23 June 1851 at Melbourne.9 A Patick Bourke of off Lonsdale Street West, in Melbourne, was described as being a milkman in 1856.10 Patrick Bourke was a labourer in April 1856 at Melbourne.11,12 Patrick (and presumably his spouse Mary) lived in August 1863 at Jeffcott House in Jeffcott Street, Melbourne. This was a wooden house, "with double verandah, and contains seven good rooms and kitchen". It was probably used as a boarding house.1,13,14,15

Patrick died on 2 August 1863 at Jeffcott Street, Melbourne, of liver disease which he had for 3 months..16 His body was interred at Melbourne General Cemetery on 4 August 1863 at the Melbourne suburb of Carlton.1,17,18,19