Michael was born in Melbourne in 1847 to Irish labouring parents, and was one of six children. He most likely spent the first nine years of his life living in Melbourne in poor conditions.

However, by the age of 26 he was working as a miner in Parkes where he married Susannah Nicholson, the daughter of a Scottish carpenter. She gave birth to a son on the day they married.

Another four children were to follow, and by 1877 he and his wife were the first wardsman and matron of the Parkes District Hospital.

Michael and his wife moved to Stannifer where he became publican of the Royal Hotel. However, this was probably the wrong sort of work for Michael - within 2 years he was dead of alcoholic poisoning at the age of 36. 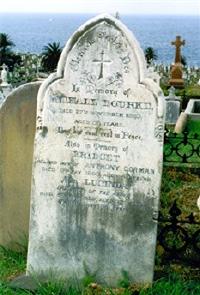 Michael was born on Wednesday, 23 June 1847 at Melbourne.1 He was the son of Patrick Bourke and Mary Ann Cannon. Michael Bourke was baptised at St. Francis' on Monday, 12 July 1847 at Melbourne. He was baptised in a Roman Catholic ceremony. St. Francis' Church had only recently been constructed.1 He presumably lived with his parents at Jeffcott House in Jeffcott Street, Melbourne, in August 1863. This was a wooden house, "with double verandah, and contains seven good rooms and kitchen". It was probably used as a boarding house.2,3,4,5

His father died 3 August 1863 at the approximate age of 63 years. Michael was aged 16 when this happened.

Sometime after this, he moved to New South Wales.

He married Susannah Alletta Nicholson, daughter of Donald Nicholson and Margaret Brown, in a Wesleyan Methodist ceremony at her father's house on Saturday, 26 December 1874 at Parkes, New South Wales. He was 27 and his wife Susannah was 24. Susannah was the daughter of a Scottish carpenter. The wedding certificate was also signed by Margaret Nicholson and James Brown Nicholson. Others attending the wedding may have included Donald Nicholson as father of the bride. Brothers and sisters who may have attended include Bridget Therese Bourke, Patrick Bourke, James Bourke, Mary Bourke, Donald Henry Nicholson, John Nicholson, Mary Jane Nicholson, Frances Nicholson and Daniel Malcolm McBean Nicholson. Aunts, uncles and grandparents who may have attended include Margaret Miller. Michael and Susannah went on to have five children over the next 10 years.6 At this time his occupation was given as a miner.6 Michael lived in December 1874 at Forbes Street, in Parkes, New South Wales.6

Michael, aged 27 and Susannah Alletta Nicholson, aged 24 became the parents of James John Bourke on Saturday, 26 December 1874 at Parkes, New South Wales. James was apparently born on the same day as his parent's wedding (although it is not known which of these two events happened first on this rather momentous day). James was to be the first of five children born to Michael and Susannah, but did not live much beyond his first birthday..7,8

Parkes Hospital c1885
Source: Tindall, R. (ed) 'One Hundred years of Local Government'
Michael Bourke and Susannah Alletta Nicholson were first matron and first wardsman of the Parkes District Hospital. This was a very small establishment with no more than six male beds and four female beds. These appointments may have been helped by Susannah's sister's husband Hugh Sutherland being president of the hospital. It isn't known how long they held the positions, but by March 1881 the hospital was looking for people for the positions again and offering to pay £75 per annum. It was customary for these roles to filled be a husband and wife, and for them to be offered the roles jointly. However, it is open to question how effective Susannah was at the role, considering she had two children within two and half years of the opening of the hospital.10,11 Michael provided information on the death of his son James John Bourke, on 18 May 1876, at Court Street, in Parkes, New South Wales, at age 28. James died of inflammation of the stomach (gastritis)..7

A newspaper article announced the opening of the hospital on 21 October 1876:
" On Friday last the public hospital was opened. The morning broke rather unfavourably, looking as though we were going to have a very wet day; but about nine o'clock it cleared up, and the Freemasons, Oddfellows, and United Miners' lodges all came forward, and marched in procession, headed by the hospital committee and the Parkes brass band, who played very creditably, under the leadership of our public school teacher Mr. Booth. On arriving at the hospital, the treasurer and secretary read their reports, showing a very satisfactory state of affairs; after which, P. Dalton, Esq., P.M., who presided, declared the hospital ready for the reception of patients. The doors were then thrown open by Mr. H. H. Cooke, J.P. Mr. Dalton made a very able appeal to tbe public to give the institution tbe amount of support it deserved. The Rev. Mr. Hopkins next addressed, the assemblage in a very forcible speech. The public then dispersed-some to inspect the building and the remainder to the sports on the green, consisting of foot-races, jumping, rounders, and a variety of other sports, all hands appearing; to enjoy themselves immensely till late in the afternoon when at the sound of the bugle, all mustered and marched in procession to the town.12

Michael, aged 31 and Susannah Alletta Nicholson, aged 28 became the parents of Mary Alberta MacCallum Bourke on Friday, 14 March 1879 at Parkes, New South Wales. It is most likely that Mary's middle name "MacCallum" was in memory of the MacCallum family who owned the "Good Hope" homestead near Yass. Donald and Margaret, Mary's grandparents, apparently lived there, working for the MacCallum family in the late 1840's..14

At some point, the family moved north some seven hundred kilometres to the tin-mining district near Stannifer and Michael took on the publican's licence for the Royal Hotel at the tin mining town of Tingha, New South Wales, - perhaps this was connected with his brother James' licence for this same hotel a few years earlier.

Michael and Susannah were likely very aversely affected by a fire which hit their hotel on 27 February 1880:
"COPE'S CREEK, TINGHA.
February 21.,
He have for a long time been in a sort of semi-stagnation, and it is only lately; through the rise of our staple produce, "tin", that we have become aware that Tingha is destined to play an important part as the centre of a large tin producing district. Several miners are now prospecting for new runs of tin, and we trust they will soon receive a rich reward.
Yesterday forenoon, a cry of fire was heard, which threw our usual quiet and phlegmatic inhabitants into a state of excitement and activity, and it was soon found that the stables and shed of Bourke's Royal Hotel, and of McLean Brothers' stores were on fire. At one time it was thought the whole town of Tingha must succumb to the flames, as several buildings, even so faraway as Sullivan's Commercial Hotel, and May and Groves' butcher's shop, had caught fire on their bark roofs. As it was, willing hands were soon on the spot, and the fire was fortunately confined to the stables of McLean Brothers and Bourke's. We believe that Mclean Bros., who lost several tons of hay, blankets, and other goods, are insured, but Mr. Bourke, of the Royal Hotel, is a heavy loser..."15

The hotel was most likely operating from a rude slab hut. Pubs where:
"the meeting places where there was always some miner celebrating his luck or drowning his sorrows at the lamp-lit bars and where there were frequent fights to settle a score or prove a point. In the evenings, mellow Irish voices and rich Welsh voices could be heard raised in song, with the music of bagpipes, concertinas, fiddles, flutes mouth organs or tambourines drifting from dimly lit tents and huts - music that drifted on the night air to mingle with the baying and barking of dogs and the grunting & squealing of pigs."16

Michael, aged 34 and Susannah Alletta Nicholson, aged 31 became the parents of Susan Georgina Gormon Bourke on Tuesday, 5 July 1881 at the tin mining town of Stannifer, New South Wales. The "Gorman" part of her name comes from her her aunt's married name, as the Gorman's also lived in the district and were also publicans..17 Michael Bourke was the publican in July 1881 at at the Royal Hotel in the tin mining town of Tingha, New South Wales.18,19 He and Anthony Gorman were brother-in-laws and were perhaps carrying on a business together as publicans circa 1882 at Inverell, New South Wales.20

On Wednesday, 21 February 1883, Michael and Susannah were witnesses at the wedding of Henry Morris and Sarah McCullagh in Wesleyan Church, in Stannifer, New South Wales.21 On May 1883 people with the same names as Mary Ann Cannon and James Bourke from the Emmaville district gave money to the Irish National League - perhaps it was this family.22

Michael died on 27 November 1883 at at Sydney Hospital in the Sydney suburb of Liverpool at age 36 of alcoholic poisoning. Michael had been in Sydney for two weeks before his death (perhaps in the care of his brother James, who ran the George Washington Hotel).23 His body was interred at Waverley Cemetery on 28 November 1883 at the Sydney suburb of Bronte.24,25 At this time his occupation was given as 'independent means'.26 He was remembered as an engineer in later years.27,28

Michael's will was probated on 9 April 1884. More than four months after his death.. He died intestate and his estate was granted to his wife Susannah. His estate was valued at £435.29