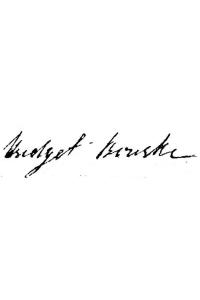 Bridget Therese Bourke may have been born circa February 1843 at County Tipperary.2,3,4 She was the daughter of Patrick Bourke and Mary Ann Cannon.

Bridget emigrated from Cork on 9 November 1843 on the "Royal Consort" with her parents. Some of the passengers on the Royal Consort seem have come from the Burhampooter which was shipwrecked - but Patrick and his family were unlikely to be amongst them.5,6 After a voyage of 103 days Bridget arrived at Port Phillip, Victoria, on 18 February 1844 with her parents.2,6

She married Anthony Gorman, son of John Gorman and Margaret Dwyer, at St. Francis' on Saturday, 16 November 1861 at Melbourne..7

Bridget and Anthony Gorman, aged 28 became the parents of Peter Gorman on Monday, 20 January 1862 at Hotham, Victoria.8,9 Peter was the first of their six children born between 1862 and 1875.

Her father died 3 August 1863 at the approximate age of 63 years. Bridget was aged about 20 when this happened.

She may have attended the wedding of her brother in the marriage of Michael Bourke and Susannah Alletta Nicholson in a Wesleyan Methodist ceremony at her father's house on Saturday, 26 December 1874 at Parkes, New South Wales. Michael and Susannah went on to have five children over the next 10 years.10

On Monday, 29 April 1878 Anthony's wife Therese gave birth to a daughter at at the Royal Hotel in the tin mining town of Tingha, New South Wales.12 Bridget and Anthony lived in 1884 at New Zealander Hotel in Park Street, in Sydney.13

Bridget died on 6 May 1893 at the St. Vincent's Hospice in Victoria Street, in Sydney, chronic Bright's Disease, coma after 16 days in the hospice.15,16,17,18 She was buried on 10 May 1893 at at Waverley Cemetery in the Sydney suburb of Bronte.17,19 Two years after her death, her widowed husband put a memorial in the paper for her.20