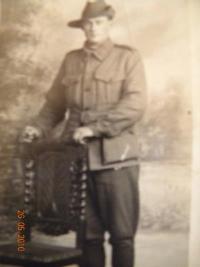 John Lloyd was born on 18 May 1892 at Sydney.1 He was the son of Thomas Augustus Lloyd and Susannah Leah Jackson.1 As of 1893, John Lloyd was also known as Cooper.1 His common name was Jack.2 He was a plasterer working for P. Ncnaughton of Hannell street.3

John Lloyd began military service on Wednesday, 22 March 1916 with the 2nd Reinforcements, 34th Battalion AIF at Sydney at age 23.2
"He embarked on board HMAT A20 'Hororata' on the 2nd of May 1916 and disembarked at Plymouth, England on the 29th of October 1916. Jack was marched to the Durrington Army Camp at Larks Hill and commenced training with the 9th Infantry Training Battalion and proceeded overseas for France on the 20th of December 1916. Jack was Taken on in Strength with the 34th Battalion in the field on the 18th of January 1917 but a month later he was treated for influenza and pleurisy and admitted to Hospital."3,2


Jack is understood to have taken part in the Battle of Messines, where casualties to his battalion alone were a severe 10 officers and 378 other ranks.3

"Whilst on leave in Rouelles, France Jack was charged on 24 June 1917 with An Act to the Prejudiceof Good Order and Discipline in that he, when granted leave handed his pass to Private Michael Bourke of the 36th Battalion on the 22nd of June 1917. For this he was forfeited 14 days pay. Jack was marched back to the front line to re-join his Company and prepare for the big push at Passchendaele."3


His battalion was involved in the Second Battle of Passchendaele, which was an extremely costly defeat. Every officer of the battalion was killed or wounded in the attack, and 323 other ranks were also casualties.
"Jack was treated by the 11th Australian Field Ambulance that evening and evacuated to the Casualty Clearing Station as he was suffering from Shell Shock but remained close to the front line for another week before he was treated at the 10th Australian Casualty Clearing Station suffering from influenza and was sent to the 5th Convalescent Depot at Rouen."3


Jack remained in France where he spent Christmas and New Year. Six weeks later he was granted leave to England on the 13th of February 1918 where 'he received a much earned rest after the horrors of Messines and Passchendaele'. However, he was recalled to his battalion in France in the first week of March1919. He was marched back to the front line as the Brigade was making preporations for a defence of Amiens.3

The battalion were gassed with mustard gas on a number of days by the Germans, resulting in widespread effects amoungst the troops.
"After surviving the German advance the 34th were ordered to dig in on the 17th of April, and it was whilst in the digging in the trenches, Jack was accidently wounded when he was hit in the head with a pick head. After he was patched up by the Australian Field Ambluance Jack returned to the trenches only to receive a gun shot wound to the face and head on the 18th of April 1918. He was again treated by the Australian Field Ambulance but due to his severe injuries he was evacuated to the Casualty Clearing Station for transfer to the 5th General Hospital in Rouen where he was admitted on the 20th of April and evacuated to England on board the Hospital Ship "Grantully Castle" the next day."3

"Back in England, Jack was admitted to the Volunteer Aid Hospital at Cheltenham where he remained until he was granted a furlough from the 24th of May until the 7th of June 1918. After this, he was ordered to report to the No:1 Command Depot at Sutton Verny to prepare for overseas deployment. After 3 weeks of training Jack was again on his way to France via Folkstone on the 29th of August and the next day he was again marched into Rouelles. He had no time enjoy the sights as he was marched back to the front line and taken on in strength on the 5th of September, but by this stage the fighting was not as intense as what it had been at Messines and he remained injury free until the end of the war. He returned to England on the 11th of January 1919."3

"Jack was attatched to the Base Depot through to March where he was granted leave with pay to work for William Sharrett at Knightly, Staffordshire for three months until the 20th of June 1919. Here he worked in the Farming Industry unit. He was ordered to return to London Headquarters at on the 23rd of June to prepare to return to Australia. Jack must have had enough of the army because on the 7th of July he was reported as being Absent Without Leave and had to forfeit 2 day pay but 2 weeks later Jack was on his way back to Australia."3