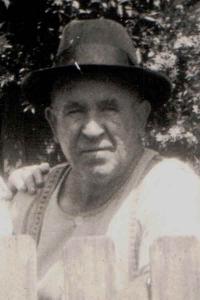 William Donald Olliver 1935
NOTE: The information on this page is my research to date and is subject to change as I become better informed. I very much welcome any corrections or additional info you might have - my email address is at the bottom of this page. Whilst historical facts are not copyright, my writing about these facts are. If you wish to use any text from this site on Ancestry or on any other website, please ask me first - Tim Hill.
+ + + + + + + + + +

William was born on Thursday, 3 July 1873 at Parkes, New South Wales. This child was the first of about 10 born to Henry and Mary in Parkes in the next 20 years..1,2 He was the son of Henry Olliver and Mary Jane Nicholson. As of circa 1875, William Donald Olliver was also known as Will.3 He presumably lived with his parents at Victoria Street, in Parkes, New South Wales, circa 1889. Henry and Mary were to remain there for another 45 years (after having lived in three other houses in town).4,3 William and Martha L. Ashpole became the parents of William O. Ashpole circa 1893 at Parkes, New South Wales. Although it can't be certain, it seems William was born from an indiscretion between his father, just newly married to another woman, and Martha, a twenty one year-old..5 William Donald Olliver was a blacksmith.6

Although the exact circumstances and her motivations can only be guessed at, in January 1895, Martha L. Ashpole fired two shots from a revolver at William Donald Olliver, but failed to hit him.8,9

Martha was originally charged with two charges; one of attempted murder and the second of attempting to cause grevious bodily harm. During the trial, circumstances were revealed that indicated that William had behaved in a irresponsible way and had treated Martha poorly, but the judged instructed the jury that they could not take that into account; rather, they had to make a determination about whether she was guilty or not of the charges. It seesm likely that the jury had compassion for her circumstances and the first charge was dropped; she was sentenced to imprisonment for 3 year.10,11,12

William Donald Olliver was taken to court by Martha L. Ashpole in July 1898 (which was likely to be just after her release from prison if she served her full sentence) and he ordered to pay 5 shillings a week for 'affiliation' - likely as a support for their child William, as Williams paternity was proved during the trial.13 [D he sailed from Melbourne to Freemantle on the SS Perth. When he disembarked he went to Murrin Murrin, Western Australia.6 Before long his wife and children had joined him.6 A picture was taken circa 1904 of William and Elizabeth and their family in Coolgardie, Western Australia. The photo says on the obverse "... the houses were built of hessian and white washed inside. The children sometimes had a ride home on camels, owned by Afghans who used the camels to carry goods. Mr. Olliver was a skilled blacksmith and coach builder."14

William Donald Olliver and Elizabeth Moore moved to Parkes, New South Wales, circa 1909 with their children.6 William again worked for his father.6 William and Elizabeth lived in 1910 at 2194 Varden Street, in Kalgoorlie, Western Australia.15 Henry sold his blacksmith business to his son William and his brother Arthur. the partnership was not a favourable one so William sold his share to his Uncle Arthur and started his own blacksmith business in Trundle, New South Wales.6 Like most blacksmiths his business consisted mainly of the making of sulkies etc.6

A group photo was taken of some of the Olliver family an unknown date .16

William Donald Olliver was a blacksmith for the Water Board.6 William and Elizabeth had a photograph taken circa 1920.

William (and presumably his spouse Elizabeth) lived in 1934 at the Sydney suburb of Dundas.4 William and Elizabeth had a photograph taken November 1935.