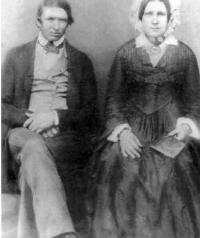 James Murray and wife
NOTE: The information on this page is my research to date and is subject to change as I become better informed. I very much welcome any corrections or additional info you might have - my email address is at the bottom of this page. Whilst historical facts are not copyright, my writing about these facts are. If you wish to use any text from this site on Ancestry or on any other website, please ask me first - Tim Hill.
+ + + + + + + + + +

James Murray was born circa 1819 at Hawkesbury, New South Wales.2 He was the son of Kennedy Murray and Ann Parker.1

Kennedy Four children of Kennedy and Ann were admitted to an Cabramatta Boys Orphanage:
Resolved that the four children of Murray aged from 3 to 10 years whose mother died insane at Castle Hill, and whose father is stated to be now insane be admitted into the school
However, it is likely that Ann wasn't dead and that there is no record that Kennedy was ever admitted to the asylum.3,4